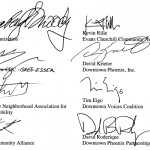 Following last week’s Garfield Neighborhood’s Revitalization & Economic Development Committee meeting, the downtown community put their heads together to identify solutions for the proposed development of a new Circle K store on the southeast corner of Roosevelt and 7th Streets. The letter below reflecting this effort was sent to Circle K representatives and signed by no fewer than eight downtown Phoenix organizations, a striking level of alignment for our diverse community. Circle K must apply for a Use Permit from the City to sell alcoholic beverages within 300 feet of a residential district. That hearing is Thursday, October 31, at 1:30 p.m.

We, the undersigned community and business organizations, have come together in order to attempt to work with Circle K to find agreeable solutions to address our valid concerns over the proposed new store at 7th Street and Roosevelt, as well as other issues with regard to Circle K’s involvement in the downtown core. Our mutual goal for any and all stores is to prosper in a safe manner with respect to the urban nature of our community and our desire for continued growth, safety, and vibrancy in downtown Phoenix.

Clearly, as evidenced by the many public outcries against this proposal, our community has very strong trepidations about the ongoing issues at the current store and other downtown stores, including 7th Avenue and Roosevelt, 1st Avenue and Fillmore and 11th Street and Van Buren. The documented crime statistics, ongoing issues surrounding alcohol sales, and often unsafe and unsanitary conditions at the stores do not reflect well on our neighborhood or Circle K. These issues are not anecdotal, but instead the clearly defined crime statistics for the current store (171 calls for service in 7.5 months from January to August 2012); actual research conducted by Arizona State University in 2011; and reaffirmed in follow-up statistical analysis in 2012 (see attached update of ASU study) point toward a direct causation by Circle K stores. Instead of focusing on mitigating the issues, Circle K has hired lobbyists and police organizations to conduct meetings on their behalf to try to convince the community that everything is better without statistical proof to substantiate these claims. However, as a community which has clawed its way back by working together to attract $4 billion dollars of investment in the last seven years, we want to find a mutually beneficial solution that is in everyone’s best interest. We feel that we have worked hard to make downtown a substantially improved market for your business without any commitment on your part to this effect.

The organizations on this letter are prepared to support your use permit application and liquor license request if Circle K is ready to make some changes to the current proposal. We propose the following:

1.  End/maintain the prohibition of sales of all single servings of alcohol at the stores at 7th Street and Roosevelt, 7th Avenue and Roosevelt, 11th Street and Van Buren and 1st Avenue and Fillmore. Circle K has already done this at the store at Fillmore and 1st Avenue with seemingly no impact on business. We also ask that Circle K end sales of 8%+ beer sold cheaply in six packs (i.e., Steel Reserve giant six pack for $4.29) at all downtown locations. Our neighborhood regularly feels the impact of the sales of this product with vagrants frequently inebriated or passed out in our community and urinating in public spaces.

3.  Void all lease claims or any other claims to the existing leased site at the northeast corner of 7th Street and Roosevelt within six months of this letter. During this six month timeframe, remove all signage, underground storage tanks, gas canopies, and any other Circle K artifacts from the site. In addition, perform a full environmental remediation so the site passes a Phase II Environmental Test.
Create an urban design that mimics the placement of multiple historic buildings up and down 7th Street:

We very much appreciate your proposed red brick façade and hope you continue using that material as well as potentially placing a higher “tower” at the immediate corner which will allow for better signage right at the intersection. We also appreciate the landscape plan (trees and wider sidewalks) for 7th Street and Roosevelt which is on your current site plan.

We understand your likely concern about placing the pumps on the east side of the building. However, the pumps will be clearly visible from both directions on 7th Street (which carries the vast majority of traffic 54,742 Vehicles Per Day-VPD) and westbound on Roosevelt (5,678 VPD, only 2,524 VPD eastbound). Signage will also help.

If this design triggers any variances the organizations below will fully support them within reason and note that they were forced due to Circle K’s desire to build a better community.

We believe these requests will not cost Circle K any money from a design perspective and in fact will make it more prominent. Furthermore, the good will generated from these actions will actually stimulate more sales for the new store.

We would prefer to not push this matter through the Board of Adjustments and Superior Court and understand that even the State Liquor Board at times denies liquor licenses as we’ve seen with similar cases, but are prepared to do this if deemed necessary. Rather, we would like to support your use permit and liquor license request at both the Phoenix City Council and State Liquor Board and welcome your new store into our community if possible.

We hope this can actually be a fruitful relationship that assists your business, instead of prolonging this   mêlée which only uses the energy we all would rather be spending to continue to build a better downtown. We invite and welcome Circle K to become the strong community partner in not just promises but in actions and results moving forward.

We appreciate your willingness to work with us and look forward to your response. Please contact Kim Moody with the Garfield Organization at 602-253-7967 or kim@alwunhouse.org and Kevin Rille with the Evans Churchill Community Association at 602-625-1632 or info@evanschurchill.org who will communicate to all of us so this process is much easier. Thank you.