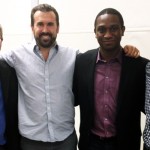 The subcommittee recommended that the City Council authorize a contract not to exceed $90,000 with Downtown Phoenix, Inc. to create an in-depth study involving extensive outreach to property owners over the next 8-12 months. The money for the study will come out of the Downtown Community Reinvestment Fund, created for just such purposes.

The focus of the study will be to develop the EMSD concept for the area, to determine the boundaries of the new district, to identify the specific services to be covered, to determine the costs, and to create the governance structure for the EMSD. The recommendation will go to the full City Council for approval next week.

Greg Esser, Roosevelt Row CDC co-founder and board member sees the EMSD as a “valuable tool to make a lasting impact in this area.” What exactly is an EMSD and why is this an exciting development for downtown? In simple terms, it is a public/private partnership that is developed to provide enhanced services to a specific area above and beyond basic city services.

Since 1974, when the first Downtown Development District (in the United States) was formed in New Orleans, more than 1500 districts like these have been created and are reshaping public management across the country. Key to their success is the unique public/private partnership model that generates revenue and provides the collective clout that comes from speaking with one voice.

David Krietor of Downtown Phoenix Inc. spoke in favor of the study at the subcommittee meeting saying, “These (public/private) organizations are tried and true all over the U.S. for promoting vibrant downtowns.”

Different states have different formation models for these entities and they are known by a wide range of buzzy acronyms. The most common catch-all label for them is BID (Business Improvement District). In Arizona, the formation model is called an Enhanced Municipal Service District or EMSD.

In 1990, the first EMSD in Arizona was created in downtown Phoenix. Known as the Downtown Phoenix Partnership, it brought a stable funding stream through a tax assessment on property owners within a 90-block area in downtown. This money paid for the creation of an enhanced security and hospitality program (Downtown Ambassadors), “Clean Team” maintenance, event facilitation, parking and transportation coordination, streetscape and urban design, and marketing for events. It brought focus, investment, people, and business into downtown. While this successful EMSD was improving the downtown core, something remarkable began happening just beyond its borders.  The Roosevelt Row arts district was coming to life.

Just over a dozen years ago, artists, arts entrepreneurs and urban pioneers began creating and nurturing a thriving, vibrant arts district along Roosevelt Row in the historic Evans Churchill neighborhood. Over the last decade, these intrepid dreamers, including Kimber Lanning, Wayne Rainey, Greg Esser, Cindy Dach, Carla Wade, Kevin Rille, Vermon Pierre and a host of others have been building their ties, engaging with their neighbors, developing innovative partnerships, creating “must attend” events, and gaining national recognition as one of the most vibrant neighborhoods in our city.

In 2012, the neighborhood was granted a prestigious ArtsPlace Award to undertake a visioning process to create an even more vibrant, healthy community in the Roosevelt/Evans Churchill neighborhood. Out of this in-depth process, involving dozens of public meetings, events, surveys, and one-on-one conversations with residents, business owners, and visitors, the neighborhood developed a vision for the area that included the key element of creating this new EMSD.

Kevin Rille, president of the Evans Churchill Community Association, who was a key participant in this visioning process said, “We have a dynamic and engaged group, and this has been an incredibly inclusive visioning process.”

Vermon Pierre, president of the Roosevelt Row CDC added, “Piggy-backing on what Kevin said, we’re proud of the unique character of the area, and this study will assess the level of interest in owning and developing our part of the city.”

This new vision for a Roosevelt Row Artists’ District was introduced to the public at a launch party at The Nash on February 20, 2014.

From the beginning, the successful activation of the Roosevelt Row/Evans Churchill neighborhood has been based on the dedicated work of committed volunteers. The creation of the new EMSD will bring in revenue and create a professional organization to take their success to the next level. Approval of this study will be an important step forward for the neighborhood, and an even more important step for the overall growth and vibrancy of downtown Phoenix.

Editor’s Note: The original title of this story did not include Evans Churchill. This oversight has been corrected.