Dancing at the Fringe 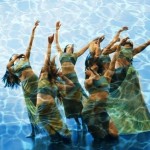 Founder and director Lisa Starry takes another step toward her ambitions for downtown Phoenix-based Scorpius Dance Theatre when the troupe travels to Scotland next week. As the first Arizona company ever selected to perform at the Edinburgh Festival Fringe by Booking Dance, an organization specializing in worldwide tours, Scorpius takes the stage to prove its merits to international presenters.

“My goal for Scorpius…is to become a highly sought-after touring company. This exposure will be invaluable…to take the company to the next level,” says Starry, who founded Scorpius in 1999 and currently serves as Associate Head of School at Metropolitan Arts Institute.

“It’s very exciting, but I’m nervous,” she continues. “This is the first time for us — we were invited last year, but we were so busy with going to the Bram Stoker International Film Festival…we couldn’t do both things.” Scorpius performed Starry’s signature work, A Vampire Tale, at the Stoker Festival in England last autumn. “It went really well,” says Starry. “We felt like we…got a nice following in Europe.” The Edinburgh Festival Fringe dates back to 1947, when eight uninvited theater groups performed at the newly-established Edinburgh International Festival, setting a precedent that led to the creation of the Festival Fringe Society in 1958. 55 years later, the Fringe brings thousands of performers to stages across Scotland’s capital in shows ranging from comedy to opera to physical theater and beyond.

Ten dancers from Scorpius will appear in five shows from August 14-18, described by Starry as “shared showcases.” She explains, “I can only perform two pieces — I only have 10 minutes.” Luckily, that’s enough time to demonstrate the troupe’s technique and Starry’s choreographic creativity. Scorpius plans to offer scenes from a full-length production called Dreaming in Water mounted at Chandler Center for the Arts this past April. “I’m bringing kind of a mixed excerpt of my Water Dreams piece with an aerial piece, because I’m trying to show as much as I can without overwhelming everybody,” says Starry.

“We’ll see what happens,” says Starry. “Hopefully we’ll have promoters see us and want to hire us so we can tour internationally.”