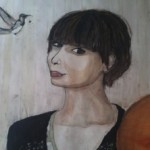 Art is a process of self-discovery, and that path, when followed by a population of artists, can play an important role in creating the character of a city.

The identity of Phoenix is made stronger by our arts community, from the small business owners who occupy gallery space, to the evolution and success of First Fridays. The city benefits from the inspiration and new ideas discovered through a creative process, but “if you don’t provide for your artists, they leave.”

Believing arts education is one way to provide for young artists, Baker in 1998 founded Metro Arts as a tuition-free, college preparatory visual and performing arts school for grades 7-12. The charter school is modeled after California art schools like Crossroads School for Arts and Sciences in Santa Monica and Idyllwild Arts Academy in Idyllwild-Pine Cove.

“Phoenix is an adolescent city. We need more people to found organizations that get others thinking about our identity and who we are,” said Baker, the current Head of School. “One advantage to living in an adolescent city is anyone can do that. After grad school I wasn’t planning on staying in Phoenix, but the opportunity to start this school came up, and I’m still here.”

“If you don’t provide for your artists, they leave.”
— Matt Baker, Metropolitan Arts Institute

In public high schools, art and music programs always seem to be on the chopping block, while a heavy emphasis is placed on athletic programs. For students serious about sports, traditional high schools provide fields, weight rooms, pools, and dedicated coaches.

Talented athletes have more opportunities to be seen by scouts or receive scholarships than do talented artists who may not even have a chance to take an art elective until their junior year of high school. By then, too much time has passed to create a well-rounded portfolio.

280 students are enrolled this year with 60-100 on a waiting list. Prospective students must be in good academic standing with at least a C average, have passed the AIMS test, and had no serious disciplinary action on their student record.

“Being an artist doesn’t mean you get to be lazy. It means you are creative. You have to produce,” said Baker. At Metro Arts, students have the guidance, encouragement, and opportunity to do just that.

Part of the vision of Metro Arts is to create a pre-professional environment that exposes students to the realities of life in the art world. Two big art shows are held each school year in which students compete to get in by submitting their best work, which is juried, just as in the professional world. Students have other opportunities to show their work at the Phoenix Art Museum, the ASU Art Museum and the Scottsdale Museum of Contemporary Art.

An Artist Grows in Phoenix

Last year as a freshmen, Bela Elvin painted a self-portrait; won second place at the Arizona Student Film Festival for a public service announcement she collaborated on about healthy eating titled “A Series of Unhealthy Events;” starred in a play; and wrote her own for the 5 Minute Play Festival titled “Dr. Khatte Tells his Tail,” a one act play about an intellectually suppressed cat. 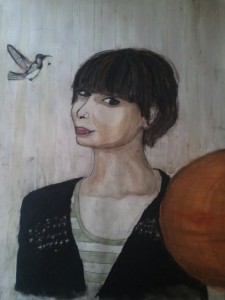 Self portrait by Bela Elvin.

Now a sophomore, she is gaining valuable hands-on experience and building an impressive portfolio while also completing the required high school academic courses in biology, geometry and humanities.

Bela’s mother, Katie Elvin, a poet and artist herself, was renting a room at 11 East Ashland, a former art gallery in Phoenix, when Bela was born.

“She came into the world surrounded by art. When she was a little girl I knew I wanted her to attend an art school,” said Elvin. “Artists think differently and may not flourish in a traditional school. I wanted to help her build skill sets to do the things she wants to do in the future.”

Bela speaks about her school and education with the maturity of a sophomore in college, not a sophomore in high school. Her passion for her work and excitement about the training she receives at Metro Arts brightens the room like houselights in a theater.

“If you just want to breeze through classes and do the bare minimum required to pass, you can do that just like you can anywhere. But if you want to make the most of your arts education, you can. The teachers have experience and vast knowledge of what they do. The academic teachers are just as passionate about their subjects as the arts teachers.” She says her math teacher considers the subject an art form. “I was terrible at math until I took his algebra class.”

All the arts teachers are also working artists from the Phoenix arts community. The Assistant Head of School, Lisa Starry, is the Artistic Director of Scorpius Dance Theater. Bela’s Mixed Media teacher is Sue Chenoweth, a painter whose most recent solo exhibition, “Spyhopping” opened at the Scottsdale Museum of Contemporary Art in 2010. Chenoweth’s work has also been shown in New York and other galleries in Phoenix. Bela says she is excited to study under such an accomplished artist this year.

After she graduates from Metro Arts Bela plans to attend McGill University in Montreal, Canada to pursue a degree in psychology and theater, but for now she is focused on making the most of her sophomore year. She wrote another play that has been accepted into the 5 Minute Play Festival and she has kept busy by working on that production.

Her favorite memory of the last school year was when Alan Arkin visited Metro Arts and spoke to the student body.

“He told us that when someone asks us what we do, not to say, ‘I’m an actress’ but instead to say ‘I’m a person who acts.’ He told us to put ourselves being a human before our work. I liked his message because he was teaching us not to define ourselves simply by our work because that doesn’t say who we are as people, ” said Bela.

Perhaps our city can be defined by people like her.