Farewell to a Bloodthirsty King 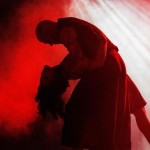 This year’s updated version (on stage through October 19) also features more goth rock music by local composer Kristofer Hill, 28 dancers, and a new aerial pole routine, but the most significant milestone is the impending retirement of Lisa’s husband, the originator of the lead male role. For ten years David Starry has performed as Victor, the Vampire King, partnering Nicole Olson in the role of the Queen. His character also seduces a young female dancer known as Eve, or The Innocent.

These performances find Starry dividing the role with Billie-Joe “J.” Bouey. “A dancer’s body has an expiration date,” explains Starry, “and this is a good time to pass the torch on to another Scorpius dancer.”