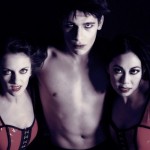 Before you know it, the fangs and corsets will get tucked away for another year, vanishing with the final performance of Lisa Starry’s A Vampire Tale. Scorpius Dance Theatre finishes its run at Phoenix Theatre’s Little Theatre in the Phoenix Art Museum complex this weekend, offering shows through late Saturday night.

Inspired by movies like The Lost Boys, Interview With The Vampire, The Hunger, Bram Stoker’s Dracula, and the Underworld series, Starry created her original work nine years ago.

Sexy and modern but tinged with steampunk, A Vampire Tale follows Eve, The Innocent (played by Rianna Rhoads), as she becomes the focus of attraction and jealousy between a vampire queen and her king, danced by Nicole Olson and David Starry. Aerialists from “A Vampire Tale”

It’s not easy to keep vampires fresh and seductive, but Starry has succeeded by morphing costumes, casting, music, and choreography. “I always change the show,” she says. “This year I have a lot more skilled aerial dancers, so we decided to create a lot more challenging piece of work.”

The techno-rich music comes from local composer Kristofer Hill, with whom Starry’s worked for the past few years. “He knows that I like a classic goth rock kind of mix,” she says with a laugh, “so it can be very flashy at times, very scary-sounding.”

Starry continues, “Every time he works on a score for me, I’m always like, ‘Darker! Scarier! Sexier-sounding!’ and he’s like ‘Got it, got it.’” Hill’s music opens the show with a light show. “We’re kind of turning the whole space into a vampire room,” she says.

Over the years, the costumes have moved away from contemporary silks to designs by Alicia “A.K.” Klovenas of Culture Revolution Clothing. “I wanted to go with more of a ‘gothier’ feel,” explains Starry. “So we did this whole kind of steampunk circus goth theme with more corsets, cute little skirts for the girls…heavy material that was going to last for 15 shows a year.”

Surprisingly, a darkly comedic vein runs through the show (pun intended), provided by actor Dion Johnson. “It’s evolved through the character of The Strange Man,” says Starry. “He’s a crazy lunatic kind of Igor vampire assistant who has these very weird comedy moments with the audience and with the Innocent.”

Although she has a clear artistic vision, especially since she’s hoping to turn the show into a feature film, Starry gives her dancers a certain freedom of expression. “When we go into the rehearsal room it’s really hard for them to act like a vampire right away,” she explains. “So I give them a handful of movies, and they pick a vampire that they’re attracted to and they feel comfortable being.”

“For example,” Starry continues, “I have a vampire this year who has really long hair…she’s all about grabbing and pulling and tugging on her hair the whole time during the show.” She laughs. “It’s like a clan – they all have their individual ideas, and I let them know if it’s too much, or not enough.” As Associate Head of School at Metro Arts, Starry founded Scorpius Dance Theatre in 1999, and she says that about 75% of her 24 dancers are professional. “The others are students in college, or getting more training under us.”

Scorpius performs several programs each season, and interrupted its local run of A Vampire Tale to perform at the Bram Stoker International Film Festival in England, an experience that’s encouraged Starry to consider touring in Europe.

“I have so many people that love the show and want to come back,” says Starry. “It’s an annual kind of excitement for me…I haven’t gotten tired of it.”