Rolling in the Deep at the Rhythm Room 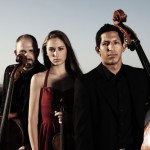 Arizona musicians often find their groove at the Rhythm Room, and tonight promised a genre-defying roster of four local groups taking the next step into a larger performance arena.

Captain Squeegee, another of tonight’s ensembles, is a hard-to-categorize Comicon-loving brass-rich band led by singer Danny Torgersen, while Chris Peña Group describes its music as “a mixture of pulsing synths, punchy basslines and art-rock sections…somewhere between angst and ambition…to the tune of electro-funk sautéed with a dash of jazz-infused pop.”

Simply Three formed in October 2010, when Clark and Villalobos found a kindred spirit in Lemmelin. “She was loud, and…energetic, and she was exactly what we were looking for,” says Clark. The trio recorded soundtracks for the independent films Brahmin Bulls and Within, and frequently performs school concerts around the Valley.

Although he didn’t come from a musical background, Clark began playing the cello at 10 and fell head over heels in love with the instrument. “In ninth grade…we played ‘Nimrod’ by [Edward] Elgar, one of the Enigma Variations,” he recalls. “Professor Timothy Russell was the conductor, and I remember…he explained that Elgar wrote this for his wife. He told us about his love for his wife, and…to try to feel that love while we played.”

Clark laughs lightly. “That was life-altering. I cried the next time we played it — I felt Elgar’s love.” He continues, “It was this sublime spiritual experience, and that’s when music…really touched me.”

Villalobos and Clark grew up together in the Phoenix Symphony Guild Youth Orchestra, and later decided to form their own ensemble and perform their favorite music. Clark remembers thinking, “Why should there be boundaries?”

Since the inclusion of a double bass pushed beyond the limits of a typical string quartet instrumentation, the duo added a violin and created their own arrangements, starting with “Yesterday” and other Beatles favorites and continuing with standard wedding repertoire.

Today, their signature tunes run the gamut from Gautier to One Republic, Clark’s favorite band. “Our best stuff is different, that we save for the live shows,” says the cellist. “We do ‘Rolling in the Deep’ by Adele and ‘Clocks’ and ‘Fix You’ — kind of like a mash-up of those two songs by Coldplay.”

“We [also] do…’Orange Blossom Special’ and ‘The Devil Went Down to Georgia,’” he adds, “because Olivia is really good at fiddling.” Other repertoire includes Metallica’s “Battery” and a Michael Jackson mash-up of “Earth Song” and “Human Nature,” as well as a soundtrack blend he describes as “Lord of the Wars” — The Lord of the Rings and Star Wars.

The ensemble also plays Macklemore’s “Can’t Hold Us” mixed with Justin Timberlake’s new song “Mirrors.” “One of our goals is to stay really, really current and put out one new video a week on YouTube,” explains Clark.

Improvisation is important, too. “Nick can throw down some sweet grooves on his bass,” he continues, “and we just kind of learn the progression and then…just jam… It’s a really fun point in the concert…that’s when the magic happens.”

As Simply Three builds its fan base through appealing arrangements and raises money through a Kickstarter project, the group continues its outreach with the goal of a fall school tour through Utah and Idaho along with more recordings. December brings the hope of a Christmas album and performances as featured artists on December 8 for Westwood High School’s holiday shows, as well as a free concert.

The trio has an enthusiastic mentor in ASU’s new tuba professor, Deanna Swoboda, as well as management from Dow Artists and a possible sponsorship by Eastman Strings. “We just enjoy playing the music we love for audiences and kids,” says Clark, “showing them that you can play whatever you want.”

All photos courtesy of Simply Three.