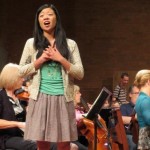 Music protesting war and violence takes many forms — from 20th century songs like Metallica’s hit “One” and Sting’s “Russians” to earlier expressions by Bob Dylan, Peter Paul and Mary, and Joan Baez. And long before John Lennon and Pete Seeger made their mark, classical composers were objecting to conflict; for example, Benjamin Britten with his War Requiem and Krzysztof Penderecki with his Threnody for the Victims of Hiroshima.

English composer, teacher, writer, and conductor Ralph Vaughan Williams brought his own style of protest and commentary to his interpretation of the Roman Catholic Mass, Dona nobis pacem (“Give us peace”). Written in 1936 and 1937, the cantata uses text from the Bible, a parliamentary speech by British statesman John Bright, and verse by Walt Whitman.

“Dona nobis pacem was written in the dark days of the late 1930s as another European war loomed,” explains MusicaNova Music Director Warren Cohen. “Although the last section ends hopefully, the quiet ending suggests that perhaps he [Vaughan Williams] saw that things were not so hopeful in 1936.”

The six-part work includes martial drums and bugles followed by the mourning of a movement titled “Dirge for Two Veterans,” and through it all a solo soprano voice rises in entreaty. “This plea for peace is emotionally direct…[and] can be seen as a plea for sanity,” says Cohen.

This evening, he leads MusicaNova Orchestra in a performance of Dona nobis pacem and other vocal works in a program called And Open to All: Opera, Oratorio, and Song at Central United Methodist Church. The combined choirs of Arizona School for the Arts and Central United Methodist Church join the orchestra (full disclosure: I’m one of the musicians). “This concert is an exploration of diversity within vocal music,” says Cohen, who has a very personal interest in song since he’s married to a soprano. He chose not only the large, introspective work by Ralph Vaughan Williams but also an assortment of art songs from the late 19th and early 20th centuries as well as a classic operatic scene.

“The songs represent five separate and distinct visions of the subject of desire and love,” he continues, describing works by Richard Strauss, Hugo Wolf, and Aldo Finzi. “From the expression of lost love in ‘Allerseelen (All Souls’ Eve)’ through the psychopathic manipulation of ‘Der Rattenfänger (The Rat-Catcher)’ —  based on the Pied Piper of Hamelin — to the glow of ‘Morgen (Tomorrow),’ the anxious puppy love of ‘Cäcilie,’ and the longing of ‘Catharine,’ each song represents a radically different take on the subject.” The program’s operatic excerpt is an ensemble scene from Mozart’s Don Giovanni, set at a party hosted by Giovanni himself, who hopes to seduce the country girl Zerlina in the course of the evening. They’re joined by Zerlina’s fiancé, Giovanni’s servant, and three masked strangers who secretly seek revenge against the seducer.

Musically, the scene features multiple voices and three instrumental ensembles, and at one point three different dances — a waltz, a quadrille, and a minuet — overlap in carefully engineered chaos “as Mozart anticipates the experiments of Charles Ives by 125 years,” says Cohen, whose adventurous programming has won him an award from the American Society of Composers, Authors, and Publishers (ASCAP) and the American Symphony Orchestra League (ASOL).

“[It’s] a tour-de-force of complexity,” he concludes. “The seven voices appear in the guise of soloist, duet and trio partners, and ensembles, sometimes tripping over each other as the various operatic conventions run almost simultaneously.”

Event: And Open to All: Opera, Oratorio, and Song