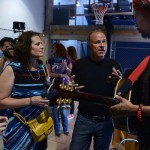 Grant Woods has been a lot of things. A lawyer. John McCain’s chief of staff. A social commentator. For eight years, from ’91-’99, he was Arizona’s attorney general. Somewhere in there, Woods got to know many of Arizona’s most known and beloved local musicians, including Hans Olson, Michael Nitro, Scotty Johnson (Gin Blossoms), Walt Richardson, and many others. Then Woods picked up a guitar and became something else: After pulling together enough tunes to deem it a collection, he reeled in a good number of these musicians to record the songs for him, an act which culminated in an album called “The Project,” released earlier this year and now available on iTunes.

This Friday night, at the Orpheum Theater, this it-could-only-happen-in-Arizona musical act goes live. And not just for kicks, but to benefit the Arizona School for the Arts (ASA).

Marion Donaldson, Development Director for ASA, explains how Woods came to team up with ASA: “Grant is an ASA [student’s] father and has been incredibly supportive and vocal about the unparalleled value of high quality academics and arts education his daughter is receiving. In writing this album and bringing together local Arizona based creatives and musicians to perform it and give life to his words, he wanted to change the national conversation that judged Arizona as politically volatile, hostile toward immigrants, uncaring about education, etc etc [sic] to showcasing the many wonderful things and people in our state.” What’s Donaldson most looking forward to? “Our students having the chance to collaborate and sing on stage with these accomplished musicians. It is excellent exposure for them and helps them increase their confidence, showcase their talents, opens up new possibilities, and will create a truly special memory as a student at ASA.”

Tickets for the show are running out quickly, so buy ‘em up as fast as you can for $22 apiece.