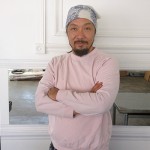 Downtown Phoenix is about to get a bit sweeter. Scratch, a Scottsdale based French restaurant and bakery run by husband and wife team Duc and Noelle Liao, is set to open a second location in downtown Phoenix. It will be one of a handful of restaurants to occupy the long-empty Canvas space, on 3rdStreet and Roosevelt. La vie en pastries!

Originally from France, owner and chef Duc Liao whips up beautiful creations in the kitchen and behind the lens, as a professional fashion photographer whose work can be found in everything from Vogue to Vanity Fair (and DPJ). The transition from beautiful images to beautiful pastries may seem a far stretch, but to Liao, it makes perfect sense.

“It’s all about expressing yourself,” he said.

Perhaps the sweetest part of the deal is the revitalization of empty downtown real estate into a vibrant epicurean hub, featuring Asian, Mexican and American dining options, not to mention luscious French dessert. As a surprise and treat to Phoenicians, Liao will be simultaneously opening a dedicated French pastry café next door to Scratch restaurant.

“We tried to have something that exists everywhere, at least in big cities, but not here in Phoenix yet. A really dedicated volume and space to pastries, so people can drive miles to find something sweet. Because I used to do that, in Paris.”

Renovating the space came at the perfect time for Liao, who says he’s thrilled to have a presence in the growing downtown area.

“We love downtown Phoenix. It’s a place where we couldn’t afford to be before, but now that it’s more developed, it’s an amazing time for us to be here.”

Liao is also reworking the lunch and dinner menus to feature playful twists on classic American fare, as well as French staples that remind him of home.

“Lately we’ve been developing a lot of burgers. I think that this is an amazing texture,” Liao said.

Creating complements to the traditional burger has resulted in a wide variety of flavors, Liao said, including variations on Kobe and crab burgers.

“People are responding amazingly to those differences.”

Look for the opening this weekend, giving downtown visitors a new destination during what promises to be a fantastic First Friday.