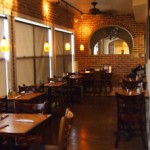 After seven years in business, Cibo Urban Pizzeria Cafe is truly a Downtown Phoenix success story. The family business situated in the historic bungalow at the corner of Fillmore and 5th Avenue has expanded yet again to meet the needs of the growing Downtown.

If you’ve been to Cibo, you know they have a vibrant front patio, but what you may not know is that they actually have three. It wasn’t too long after opening, Michael and his family figured out that people enjoyed eating their southern Italian-style pizza outside. When one patio wasn’t enough, soon another was added. And then another. But then came the biggest decision yet – to add more space inside.

“It meant two things.” Michael Krassner, Cibo’s manager specified. “It increased our seating by 64% which meant more seating to serve at lunch. We also gained a kind of ‘hang-out’ area where you could eat or just get drinks and appetizers.” These two area additions also translated to extra space in both the bar and in the kitchen.

With the expansion of the indoor space, comes the opportunity to also increase Cibo’s offerings. Michael and Chef Guido Saccone are looking to extend their current twice-weekly housemade pasta offerings into a regular menu feature. The newly added weekend brunch will continue, and Michael hopes to introduce a series of Italian wine tastings to complement an increased wine and beer selection.

“Obviously our business has grown since we opened and we continue to grow. The fact that we’re expanding feels amazing and is a good sign. There are good reasons for my family and I to be here.”