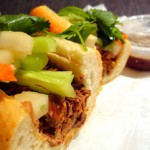 There is something special about a neighborhood that preserves its historic charm while enlivening it with great food.

Cooking Light recently announced to the nation what we downtowners already knew about the Coronado neighborhood: it’s where we can fill our bellies, drink ourselves content and have oh-so-decadent sweets to boot. As Cooking Light put it, “Phoenix’s Historic Coronado Neighborhood’s preservation efforts have led to a culinary revival of sorts: the neighborhood’s meticulously restored homes now house some of the best eateries in the city, such as The Main Ingredient Ale House & Café, Rice Paper Eatery, Coronado Cafe, and 1950s union hall-turned-home-turned-restaurant Tuck Shop.”

We couldn’t agree more. The upcycled atmosphere behind each of the restored eateries instantly instills a warm, comforting feeling upon arrival. The bungalows are practically telling you to savor the buttery sweet America’s Corn from America’s Taco Shop, the caramelized fig pizza at Humble Pie and the hot fudge sundae at McAlpines Soda Fountain. After all that food, they’re pushing you to sip on the craft brews at Main Ingredient Ale House or the specialty cocktails at Rice Paper. If only walls could talk.

While Coronado’s food scene was our best-kept secret, we can now take comfort in knowing those restaurants and eateries have become national destination spots and are helping to revolutionize Phoenix’s food scene.