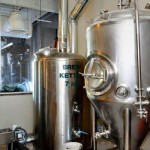 The 13th Annual Arizona Strong Beer Festival returns to Steele Indian School Park tomorrow, Saturday, February 16. The best beer festival in the Southwest called Central Phoenix home for the last four years. For at least a little while, the Beer Culture center of gravity moves out of the East Valley and we all get a glimpse of what life might be like with a few more breweries in the central city.

Beer is ordinarily the star at the fest, with each local and regional brewery bringing something to showcase the kick-off of Arizona Beer Week (Feb 16- 23). This year, however, the top story is the number of new breweries pouring this year. Eight Arizona breweries will be making their Strong Beer Fest debut. Their struggles and successes provide insight as to the future of beer in Phoenix between 7th Street and 7th Avenue.

Cosmic Beer out of Flagstaff began as a distribution company that contract brewed with the now defunct Mogollon Brewing Company. It has been recently reported that Cosmic lost its  bid to buy Mogollon’s brewing equipment. If this is true, Cosmic will have to find another brewery to brew its  line of beer. Saturday may be our first chance to find out the answers to both the Earthly and Cosmic concerns. Flagstaff’s newest brewery, Wanderlust Brewing  is headed by Nathan Friedman. More to the point, it is literally a one man operation. Wanderlust represents one of the two nanobreweries pouring at the festival. Nanobreweries have brewhouses that are generally under 3 barrels. By way of comparison, Four Peaks has a 40 barrel system in its 8th Street brewery and a 60 barrel system in its Wilson Street facility. There are some that believe that Phoenix could support dozens of nanobreweries, however most of the nano-operations are not sustainable in the long haul. Friedman compares his brewery to a journey and so it seems likely that he and the brewery may need to evolve as his opportunities open. Alternatively, it seems, Friedman is happy and appreciative about the moment. That’s something that many downtown business owners share. Zen from the High Country.

It was quite a shock to some when Desert Eagle Brewing announced that it would set up shop in downtown Mesa. It’s already considered a major driver in Mesa’s nightlife revitalization plan. Believe it or not, there were two other breweries looking to locate in Mesa. Mesa seems to have plenty of right-sized and right-priced buildings to support smaller production breweries. Something that Phoenix should consider when the wrecking ball cometh.

Tucson’s Dragoon Brewing  just missed last year’s festival. Both Tucson and Flagstaff have seen enormous growth in the last two years. I’m really looking forward to tasting the Mesquite Smoked Porter. This ex-homebrewer team has already produced Tucson’s favorite IPA and many of their offerings make it to Phoenix. Fate has a tiny but effective brewhouse.

Fate Brewing may very well provide a blueprint for a smaller brewpub that could fit right in on Roosevelt Row or on Central. The Scottsdale brewpub is small by design. A woodfire pizza oven keeps everyone fed and all beer brewed is sold on premise. The godfather of this “wee humble brewpub” concept is Tom Hennessy of Colorado Boy Brewing in Ridgway Colorado. Hennessy started two of his own GABF award winning breweries and has mentored a total of three Arizona start-ups. Ideally, an existing restaurant or bar is purchased and then a brewery is shoehorned in. This strategy allows a brewery to start-up with less cost than a traditional brewery. Fate founder, Steve McFate built the restaurant on Shea (off Scottsdale Road) from scratch. His higher end concept has attracted that neighborhood’s crowd and attracts the Valley’s Beer Geek contingent.

Tamara and Steve Morken of Pine’s THAT Brewery also learned brewing operations from Hennessy. The Rim Country brewery distributes kegs here in the Valley, which runs counter to the sell-beer-across-the-bar-only strategy. It will be interesting to see if Mischief Brewing (the third “wee humble”) will follow start-up plan to the letter. Mischief  is still in the building phase, but plans on locating in Peoria. You want an OHSO in your downtown.

Though not a disciple of the “wee humble” school, OHSO nanoBrewery certainly has some of the elements that a downtown Phoenix brewery would need to thrive. It has a great selection of beers, interesting food and a comfortable indoor-outdoor feel. Even without the brewery, the business has the chops to remain a vital part of its Arcadia neighborhood. OHSO is currently making small batches of beer on what might normally be a large brewery’s pilot system. Generally adhereing to the no-distribution-sell-it-all-on-site mantra, an OHSO-like enterprise could very well work in the 7th Avenue and McDowell neighborhood that borders Willo and Encanto-Palmcroft

North Mountain Brewing  may not be able to bring their beer to the dance this time around as they only recently became federally and state licensed. You can be sure that Brewmaster Robert Berkner will be at the festival, so it will be a good time to ask him how his Sunnyslope neighborhood brewery is shaping up. Berkner took great aims to find a neighborhood that he could support. Let’s see if Sunnyslope is ready to give back.

One other new brewery, Freak’N Brewing Company, is not yet licensed but will be represented by a beer that they collaborated on with Sun Up Brewing in the Central Corridor. Double Black IPA contains twice the hops of Sun Up’s Trooper IPA and just enough roasted malt to darken the color. Freak’N Brewery is currenly awaiting approval for its Peoria brewery.

While we are not talking about a large Arizona brewery moving into the stadium district or Gordon Biersch taking residence in CityScape this year, there are a few encouraging signposts on the horizon. Arizona’s thirst for beer is being met ably. The Strong Beer Fest’s freshman class gives a beer fan some hope for a downtown brewery in the future.