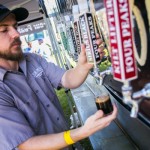 Arizona Beer Week festivities begin this Thursday and whether you’re a craft brew connoisseur or just a beginner, you’re sure to find something to please your beer-drinking palate. Events are scheduled across the state from February 11 through February 21, but here is a list of events you’ll find in the greater downtown Phoenix area. Click on each event to learn more.