Online ‘Fit Tools’ Help Locals Slim Down and Tone Up 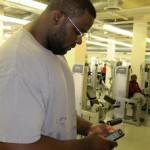 Some may argue that modern technology leads to laziness and weight gain, but more Phoenix locals are discovering their phones and computers can actually help them shed some pounds and tone their muscles.

Deb Wright, Weight Watchers general manager in Phoenix, said at least half of Weight Watchers’ members use online and mobile technology to aid in the weight loss process. This technology launched way back in 1997, but since then, it has “evolved considerably.”

“(Members) are still tracking what they eat and the point values, but the program is much more good-looking and easier to use,” Wright said. “It’s no longer just PC or desktop-based. Now, everything is mobile.”

Wright added that a study published in 2007 revealed members who used the online technology while attending weekly Weight Watchers meetings had more success in losing weight than those who did not use the technology.

Weight Watchers members aren’t the only ones using online tools to stay fit. A member of the Valley of the Sun YMCA said he uses his phone to track all of his workouts with an app called iFitness.

“I log my exercises to keep track of my progress,” said Craig Eckwood, an Arizona State student (pictured above). “I used to just keep it all in my head before, but this works a lot better because I won’t forget anything.”

Eckwood added that he has used iFitness for about two years, and he plans to continue using it because of the convenience. “It’s much easier than carrying around a book or something to write everything down,” he said. “This way, I can remember where I’m at with my workouts and push myself to take it that one rep farther than last time, and that’s key.”

The YMCA also partners with Life Fitness to provide its members with virtual trainers. This online program  allows exercisers to create customized workouts that challenge them with tougher levels and intervals while working out.

Along with using apps to customize their workouts, many people download tools to keep track of calories and log what they eat.However, dieters should take heed of these apps’ limitations.

“It’s good that people can get an idea of what they are putting into their bodies, but I feel like (mobile tools) can be used as a crutch,” Gargotta said. “People can educate themselves on calorie content of foods, but they also need to make sure they are getting the right amount of proteins, carbohydrates and other nutrients.”

Gargotta also said apps that track calories are certainly becoming more popular, but many people call it quits after awhile.

“They will initially see changes in their weight and body composition, but after awhile, their bodies plateau because they’re not getting the nutrients they need,” he added. “People depend upon the app to lose weight and don’t balance it with proper exercise.”

Rather than simply logging calories in and calories burned, Gargotta said he advises people to pair the tools with an active, healthy lifestyle for optimal results.

“At the end of the day, what’s important is being educated,” Gargotta said. “People should be able to look at a food and have an accurate estimation of what’s in it, but that’s on the shoulders of the user to learn it.”