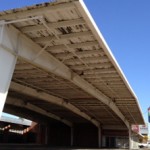 Spearheaded by Fox Restaurant Concepts, an indoor/outdoor urban dining and lounging hub is scheduled to open late Fall in the heart of Central Phoenix. Housed in a former auto and motorcycle dealership known for its iconic steel shade structure, the multi-use space will share a large park-like outdoor recreation area and beer garden and will be anchored by Fox Restaurant Concepts’ second Culinary Dropout and a new fish house and oyster bar. The development will also include a local coffee shop and two retail spaces, which will be operated by other local companies. The new spot will reportedly offer a park-like area for guests to gather under this shade structure.

Utilizing the existing building and parking cover from the former dealership, Fox Restaurant Concepts and WDP Partners are revitalizing the neighborhood by creating a community gathering spot. Constructing a destination unlike anything in Phoenix, the vacant building will be turned into a functional, hip space that is sure to be the go to place for dining and lounging. WDP Partners and Fox Restaurant Concepts goal is to repurpose the current structures as much as possible.  The area underneath the massive shade structure will be converted into a climate-controlled, landscaped recreation lawn where guests can dine outdoors, sip on coffee or cocktails, play outdoor games such as bocce ball, and listen to live music.

According to Fox Restaurant Concepts Founder and CEO, Sam Fox, “We were drawn to working on this project because of our ability to use as much of the current structures and create a park-like space in the middle of a very urban setting. Making the development even more appealing, there is enough space to create more than 100 onsite parking spots which is rare in new urban development.”

Serving as the anchor for the project will be Fox Restaurant Concepts second Culinary Dropout – a casual, chef driven gastro pub featuring craft cocktails and eclectic pub fare perfect for late-night diners.  The restaurant will take advantage of the open air, garage feel, including large floor to ceiling roll-back doors, which will open onto the outdoor recreation area and beer garden. In addition to Culinary Dropout, Fox Restaurant Concepts will also be creating a soon to be named fish house and oyster bar.  The new seafood concept will have a Brooklyn like vibe and be reminiscent of an old urban seafood shack. The restaurant will serve a raw bar focused menu, in addition to comfort food such as chowders, fish and chips, and po-boys. From the raw bar, order fresh seafood such as prawns, razor clams, and oysters flown in daily. Pairing well with the menu, the fish house will also serve a stand-out white wine menu and an eclectic beer list.