Meet the Artists of Martinis & Masterpieces 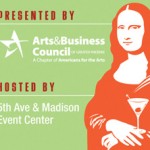 Cocktails parties are always something to look forward to, but Martinis and Masterpieces takes the concept to new level.

The annual Arts & Business Council fundraiser at Downtown Phoenix’s Madison Event Center on April 27, is described as a “casual, afterwork fund-raising cocktail party, original-art exhibit and silent auction.” This special event brings together a collection of cocktail makers with an impressive roster of local artists (see full lists below).

As much as we can wax poetic about a good martini, we’re here to talk about the art. The artists committed to supporting a good cause represent a range of styles and mediums, and the variety should make for a stimulating accompaniment to the liquid refreshments.

Below is the first group of participating artists. Look for others to be revealed in the days to come. The unifying themes in Carolyn Lavender’s work are generally organizational systems, such as the grid, with an interest in sequential process and a straightforward presentation of ideas and images. His drawings are based on existentialism, religion, pseudoscience, gender roles, death, discovery, and the dualistic nature of the human experience in the 21st century. Emily Costello finds much of her inspiration from her Mexican heritage and its cultural icons and images:  Luchadores (Mexican wrestlers), Mexican folk heros, sacred heart, Loteria (Mexican bingo), Frida Kahlo and Dia de los Muertos (Day of the Dead) are abundant in her work. Sal Cosenza is a recent graduate of Arizona State University with a BSD in Architectural Studies.  Born in 1988 in Scottsdale, Arizona, he has a particular fascination with New York subjects. Deborah’s art reflects the era that has always meant the most to her: The 1950s – a time where anything can happen. At first glance, his work is dominated by basic shapes and bright colors. Upon further inspection, realistic faces and subtle colors draw the viewer into a more complex situation that provokes unexpected thought and emotion. My work explores the connection between the environment and the human experience. When we recall memories of people and places; we are left with a feeling that captures the overall experience.