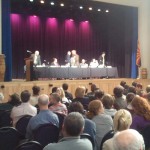 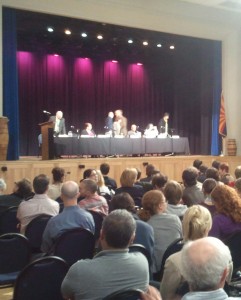 A diverse group of nearly 400 people filled the auditorium to hear from the author of the book and six other distinguished panelists who discussed issues ranging from water use, transportation, renewable energy, policy, urban agriculture, and how social inequality affects sustainability. In addition to Ross, the panel included Steve Betts from the Urban Land Institute; George Brooks of NxT Horizon Group and sustainability consultant; Terry Goddard, who served as mayor of Phoenix from 1983-1990 and is the former Arizona Attorney General; Taz Loomans, an architect and sustainability writer; Eva Olivas from Phoenix Revitalization Corp; and Silvia Urrutia of the Raza Development Fund. Charles Redman, the founding director of the ASU School of Sustainability, moderated the discussion.

Susan Copeland, the steering committee chair of Downtown Voices Coalition, welcomed the crowd and introduced the panelists and the moderator. The executive director of the museum, Princess Crump, welcomed the crowd to the museum and gave a brief history of the building, which was built in the 1926 as the first segregated high school in Phoenix and remained so until 1954. In the 1980s, the building was saved from demolition and over the past ten years has been converted to a museum and cultural center, a prime example of sustainable adaptive reuse.

In his opening remarks, Ross said he had originally come to Phoenix to see what role artists were playing in downtown revitalization efforts. He was impressed with their work, but realized that, even if they were successful, downtown would only be a sole, small island of sustainability. He expanded the scope of his research to the entire metro area and conducted over 200 interviews with people from government, non-profits, the private sector and artists. His research led him to the conclusion that Phoenix is the least sustainable city in the world.

“I know the book title ruffled a few feathers and deflated some people’s sense of civic pride, but the book is based on ideas and opinions of people who live here.”

He explained that he choose to write about Phoenix because it is “environmentally challenged in many ways.” However, if Phoenix is able to find solutions to the problems it currently faces then any city can. “What happens in Phoenix is more important than what happens in Portland.”

One main theme from the discussion was the need for a holistic, grass roots approach to sustainability, which includes personal initiative and responsibility. Brooks pointed out that the museum carries the name of George Washington Carver, the man who is considered to be the “father of modern agriculture.” His research in agricultural chemistry developed more efficient methods of farming and helped the economy of the South recover by growing peanuts, soybeans, sweet potatoes and pecans.

“He looked at an issue and applied from the bottom up the process we now call sustainability. He didn’t wait for the legislature,” Brooks said.

The lively discussion moved quickly with each panelist given a maximum of two minutes to answer a question. The chapters of Ross’s book were used as an outline for questions beginning with one of the most pressing concerns for Phoenix: water. What can Phoenix do to address long-term water use? Are xeriscape yards and landscapes the solution?

Loomans disagreed that xeriscape is the silver bullet, stating that while some things like turf and trees may use more water, they provide shade and mitigate the urban heat island.

“There has to be a balance,” she said.

The floor was opened and members of the audience asked questions about recycling, place making, shade, adaptive reuse, and gardening.

By a show of hands, most people in attendance had a garden but by another show of hands, few people had actually walked, biked, or taken the light rail to the event. In Phoenix, the car still dominates.

Standing off to the side of the crowd, wearing a black cowboy hat and leaning on a cane he said in a booming voice, “We are being poisoned in South Phoenix,” referring to the environmental violations of Fischer Sand and Gravel and Southwest Asphalt. “We went up against the $700 an hour lawyers, and we won, but my community is still dying.”

Ross made the point that the city touts rubberized asphalt as sustainable, but the plant that makes the asphalt was poisoning nearby residents.

As the hour came to a close, the panelists were asked what one thing would make Phoenix more sustainable. The panelists each offered achievable goals: price things at their actual cost and stop subsidizing sprawl, focus on infill development, make going car-free or car-lite a viable option, education about sustainability and civic engagement, and the repeal of Prop 207.

Those who had been waiting to ask a question were given the opportunity to share their vision as well. The mic was passed down the row where ideas came in rapid-fire succession: more use of pervious concrete, temporary uses of vacant lots, discouraging land banking, being involved with the General Plan update, and educating young people to create a future of sustainability.

The audience was invited to a reception held in the Levine Machine building a block away from the museum where light food and drinks were served.

“It was an amazing discussion,” Copeland told DPJ after the meeting. “We’re pleased to see so many new people.”