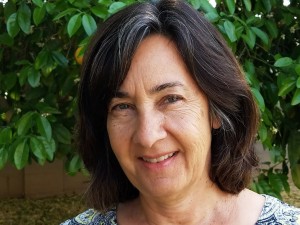 Phoenix fiber artist Ann Morton has learned a bundle about trash the past several months — including the fact that there’s too much of it. But as she rode with garbage-truck drivers and tried her hand at the conveyor belts where operators sort through recyclables, she developed new ideas on how trash — from broken doll heads to ubiquitous cardboard food containers — interfaces with her art practice.

One result is a public art piece called “Re-Thanks: A Community Expression of Recycled Gratitude,” developed in conjunction with the Phoenix departments of Arts & Culture and Public Works. It’s a 15-foot-high cascade of “garlands” of flowers crafted from cardboard, aluminum, paper and plastic that otherwise would have been discarded.

Several of Morton’s gallery shows have centered on her re-appropriation of discarded or abandoned objects. She is perhaps best known, though, for her 2013 public art project “Ground Cover,” in which she enlisted knitters, crocheters and quilters across the country to create squares for a massive floral “blanket” that temporarily covered a vacant lot in downtown Phoenix.

“Re-Thanks” also depended on community involvement, because the small, whimsical flowers that make up the 21 garlands were uniquely crafted by adults and kids in Phoenix and across the U.S. and Canada. The raw materials came from the volunteers’ own recyclable trash.

Numbering about 3,200, the flowers each bear a handwritten green card thanking the women and men working at the 27th Avenue Solid Waste Management Facility who operate the never-ending conveyor belts of potential recyclables. “Re-Thanks” is on view at the entry to the Arizona Science Center, through July 2017.

The project began to take shape in 2016 when Morton was selected to serve as the waste management facility’s artist-in-residence, along with Christine Lee, an Arizona State University professor specializing in wood art and sustainability. Each artist was on-site for six months. While Morton focused on the transformation of trash into art, Lee took a somewhat different path, zeroing in on the plethora of discarded plastic playground equipment and wondering how it could be re-used. Soon enough, Lee turned the faded or cracked components into sculptures, adding wood or other touches, and experimenting with 3-D printing. In addition, she found a way to break down the plastic and re-use it for woven mats, which are on display as part of the landscaping outside the Science Center. For Morton, another outcome of her residency with the Public Works department is a series of six 12-inch-square plaques called “Warning Signals.” Each piece is made entirely from objects and materials retrieved by Morton at the waste treatment plant. The elements have been cut, sewn and glued in surprising arrangements. Viewers who look carefully will see such items as flattened balls, embroidery, a doll’s head, a partial Nemo stuffed toy and a Target plastic bag. There’s even a sound element on a couple of the pieces that playfully include buttons to push.

Whimsical as well as serious, the brightly colored plaques manage to subtly comment on society’s fascination with “things,” especially toys, how easily we discard our things, and how we convey cultural messages on such matters as gender identity and beauty. Part of Morton’s purpose is to summon the idea of signal flags as used by ships to warn of danger.

The plaques are on view as part of the multimedia exhibition “Reimagined Trash” at The Gallery @ City Hall, through August. To find out more about Morton and Lee’s residencies at the 27th Avenue facility, as well as the story behind the flowers made from trash, visit rethanksaz.com.