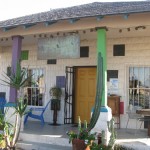 As part of the Grand Ave Fest this past weekend in Downtown Phoenix, the Grand Avenue Merchants Association hosted ReDapt tours of the repurposed buildings along the iconic highway.

Grand Avenue was built in 1888. It predated the railroad and was the primary route from Phoenix to Wickenburg to Los Angeles. The only diagonal road on the grid of Phoenix, its history is relative to the automobile industry. Most of the history of the buildings on the tour also relates to cars and travel. 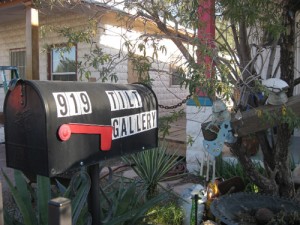 On the way to the first stop, the tour passed the Tilt gallery. This gallery and workshop space consists of two live/work houses within the Arts Overlay area.

The two readapted homes were built in 1907 and are “Sears Houses.” These homes could be mail ordered. They came with molds to pour the concrete blocks that the homes are then built with. All of the bricks are exactly the same, which makes these homes easily identifiable.

The first stop was 9th & Pierce, a purple painted building on the corner. Once a corner market in the 20s, it became a livery garage in 1925. The space was commercial on one side and a home on the other.

Venue Projects – Kitchell Perez, a developer focused on adaptive projects, and the Office of Desert Architecture, an architecture firm, now share the building. The building is split by the original kitchen and bathroom. 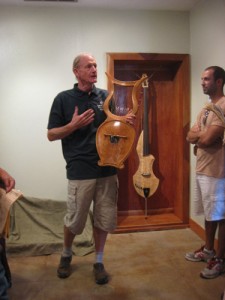 Second on the tour was Roberto-Venn School of Luthiery. The school has graduated over 1200 students of guitar making since it opened in 1969 as Juan Roberto Guitar Works. The Roberto-Venn School has newly moved to the readapted warehouse space. Originally, the warehouse served as an automobile tire business. When renovating, the school’s instructors did most of the work themselves to keep costs low.

William Eaton, the Director of Roberto-Venn School of Luthiery, is also the Vice President of Sustainable Arizona, an organization geared to creating a healthy living environment in Arizona. With his sustainable knowledge, the school has taken a lot of steps to make the building as Earth-friendly as possible. They’ve left the original garage doors intact to decrease the need for air conditioning and utilize a lot of natural light. The school will eventually re-insulate the roof and possibly add solar panels. 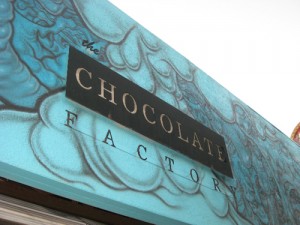 Last, the tour visited The Chocolate Factory, a gallery space featuring the work of owner, Hector Ruiz. When his art isn’t on display, he features installations done by local and out-of-state artists.

The building is most identifiable by its teal and black spray paint job. Appropriately, the building looks as though it is melting. Ruiz tries to rotate through the exterior art by offering the job to local graffiti artists.

In addition, the garage door features a piece by El Mac, an artist famous for his southwestern influenced, spray painted portraits. Ruiz shared that he won’t paint over it. It has only been vandalized once. It was originally an auto-body shop, but that part of its history remains fairly hidden.

The Grand Avenue area is the perfect place for re-adaptation of buildings to occur. With so many empty buildings with so much character, it’s hard for some people to stay away.