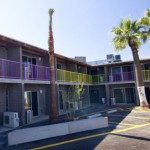 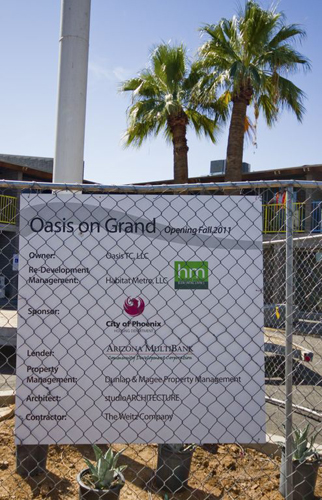 One of Downtown Phoenix’s proudest neighborhoods is getting a face-lift thanks to a new housing project on Grand Avenue. The original motor hotel, Oasis on Grand, is being adapted into housing for artists as a way to contribute to the revitalization of the neighborhood.

The 99 room motel is being converted to 60 affordable studio and one-bedroom apartments. The property has been commercially zoned as live/work space for artists, allowing their home to become their studio, gallery and a place where they can sell their work.

The 29 colorful units along Roosevelt have a windowed, street-level gallery. When the unit is open to the public, a front gate on the balcony can be open, inviting people in. These units are set up so their gallery and studio are in the front and the bedroom is in the back. The spaces on the upper level are a bit larger, but without the ground-level accessibility.

Renting a unit in The Oasis will cost an artist anywhere from $400-$700 a month. Preleasing has already begun on the Oasis on Grand website and interest has been high.

Timothy Sprague, a lawyer turned real-estate developer, and his firm Habitat Metro are behind the $5 million project. Habitat Metro developed the high-end Portland Place condominiums. Sprague hopes to include a larger gallery in the building for resident and local artists to display their work. In addition, he envisions a coffee house/bistro and a stage for concerts.

“I’m hoping to have some music associated with it. I think the music scene needs to be a big part of it and the Grand Avenue area has an opportunity to become the music scene like you see in Austin,” said Sprague.

The Oasis project is breathing new life into the Grand Avenue area. Not only does it bring Phoenix new First Friday galleries, it brings a new avenue of housing to downtown. 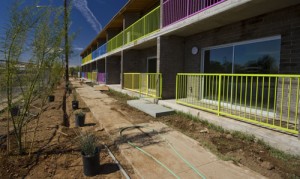 “This project is jump-starting a neighborhood renaissance that will benefit the local community as well as Downtown Phoenix for years to come. Providing 60 units of housing for families earning modest incomes could bring people to this neighborhood who have never been here before,” said District 7 Councilman Michael Nowakowski in a press release issued by the City of Phoenix.

Sprague cited many people as being extremely instrumental in this project, including Nowakowski and also Jerome Miller, the Deputy City Manager.

Sprague is no stranger to Downtown Phoenix history, especially in the Grand Avenue area. He is familiar with who owns each of the landmark buildings along with their original uses and future plans.

The Oasis is owned by Tom Carmody and was originally planned to be an affordable condo project.

“Tom has been very instrumental in saving some things downtown here that very few people know about. He owns the little shopping center where Carly’s is. You know where Modified is? Kimber Lanning owns that now. When she first opened up the gallery, she was a tenant of Tom’s and Tom said ‘for you to really get a foothold, you need to own some property,’ so Tom sold it to her,” Sprague shared. 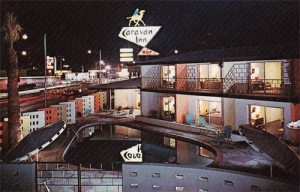 A historic picture of the old Caravan Inn

Carmody bought the Oasis Motel to help clean up the neighborhood.

“The Oasis was a 99 room hotel that was operated as a flop house. It was a den of sin.  Prostitution, drug deals, you name it. It was bad stuff. Tom bought it from a gentleman who was constantly in a battle with the fire department. They would come in and want to shut him down and he would put a band-aid over what ever was wrong to keep them at bay for another 60 days,” said Sprague.

Once Carmondy bought the property, he shut it down. According to Sprague, crime decreased by 50% in the area.

After visiting Portland and witnessing the real-estate development before and after the Portland light rail system, Sprague knew that there was real possibility in Phoenix.

“We developed two properties up there [Portland] and sold them, and we came back after the light rail system had been put back into place, wow. Changed completely,” said Sprague.

Habitat Metro then began to look at transit-oriented development in Phoenix. Sprague shared that they looked at a few properties on Camelback and Central, but were never able to make the deals work. 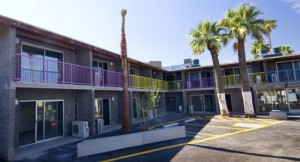 That is when they acquired the Portland Place property from the City of Phoenix and began the three-phase project. What you see now is Phase 1 and according to Sprague, it was very successful. Condos in the complex sold for $400/sq. foot.

“But what we realized is that for downtown to be vibrant and to work, you’ve got to have a full spectrum of residential properties within the market. Not everyone can afford to buy an expensive condo. So that’s one of the things that really attracted us to the Grand Avenue market,” Sprague said.

Sprague believes that in order to maintain an urban environment, there has to be residential diversity in the area. He didn’t see that in Portland Place.

“The only common denominator is that they don’t have children. It’s older, empty-nesters to single divorcees to partners to dual-income couples with no kids. The people who really want that urban scene. And to have that scene, you’ve got to have art and texture,” Sprague said.

That’s why he and Habitat Metro are creating Oasis on Grand. Visitors can tour the location during the 3rd annual Grand Avenue Festival on Saturday, October 22, from 3 p.m. to 11 p.m.