Ruben Gonzales – Not Just Monk3y-ing Around 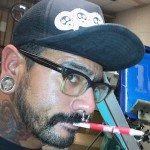 Shortly after, the Downtown Phoenix resident and former cell-phone company employee started his own business, 11th Monk3y Apparel and Designs.

He named it after his affinity for collecting stuffed monkeys throughout his lifetime and because the number 11 stuck out to him. He liked that the name sounded catchy but also that it was unique, which was exactly what he wanted his label to be.

“I think I’m pretty out of the norm at times so I wanted my clothing to be like that,” Gonzales says. “The meaning behind it was to be different, stand out, own your individuality and make whatever it is you wear unique to yourself.”

Before launching 11th Monk3y, Gonzales was part of the local breakdancing scene for about 19 years, and one of the reasons he wanted to start his business was to provide inexpensive clothing to other b-boys.

Gonzales says he tries to keep his shirts priced between $10 and $20 and his jackets and sweatshirts between $25 and $35.

“I wanted (my clothes) to be affordable, and I wanted these kids to have cool gear and feel comfortable with what they’re rocking.”

In addition to designing clothes, Gonzales also builds bicycles and creates metal furnishings and artwork and anything else he can think of.

“Whatever I can imagine, I try to create just to see what it’s going to look like and if people like it, then I’ll usually make more and put them up for sale.”

Rising on Roosevelt
Gonzales says that about 90 percent of his designs he creates himself, and that the other 10 percent are collaborative projects.

But Gonzales has been teaming up with people in Downtown Phoenix to create more than just clothing.

Less than two months ago, he and local artist Joseph “Sentrock” Perez went to a Roosevelt Row meeting at monOrchid to get to know other artists and downtown locals.

The two men, who had already talked about how great it would be to someday open a shop together, were offered a place on Roosevelt Row that night.

They chose to call their store The Rise Project, which was the name of Perez’s after-school program for students in the urban school district. The goal of the program was to teach students breakdancing, MC’ing, DJ’ing and graffiti art, and how to practice these elements of hip-hop with respect, Gonzales says.

Gonzales says the name fit their new shop because they were “rising from nothing.”

The original Rise Project had lost its funding but Perez was eager to continue it, so they decided to donate some of the proceeds from the shop to continue the program throughout the summer. Collaboration Continues
Perez has decided to leave the shop to pursue other opportunities and Gonzales has joined forces with management consultant Dave “Bully” Bjorn and local artist Monica Robles to create a new project in the same building.

Gonzales will continue using the space for 11th Monk3y, Bjorn will use it for his consulting firm and other projects, and Robles will use it as a studio for her artwork.

While the three will use the space for their individual work, they also plan to collaborate on projects.

Gonzales says he is interested in photography and that Robles has agreed to teach him more about it so that he can pursue it further. In return, he will be helping her put her artwork on T-shirts.

Bjorn is going to help them with the business aspect of the space such as connecting with the right people, Gonzales says.

Gonzales hopes the three of them will evolve their skills through the collaborative projects and hopes they will be able to create projects that give back to the community in some way. He also hopes the space itself will make people feel welcome, encourage community involvement and inspire people do something of their own.

“Our goal is to try to bring the community a little bit more to life … make it feel like it’s a city where you can come, park your car and enjoy half your day.”

The Rise Project Pop-Up Shop closed its doors Monday and will reopen September 1 for a soft opening. Gonzales anticipates that by Third Friday, the entire space, which has not yet been named, will be functional and ready for a grand opening.