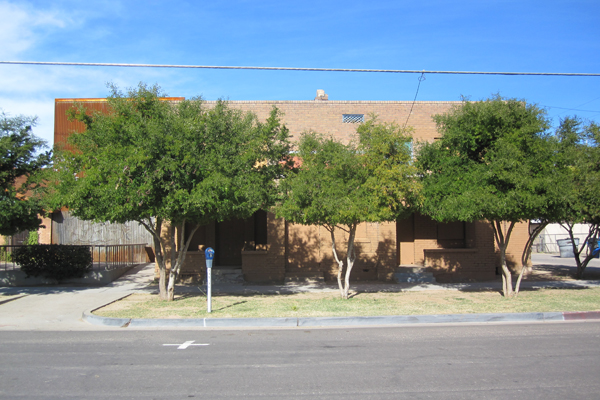 These days, the Harry S. Bennett Apartments are probably best known as a convenient stoop to hang around on First Fridays. The building on Garfield Street between 4th and 5th streets is in serious need of some TLC, which it was set to receive more than a year ago when it was slated to become Matt Carter’s El Rey restaurant, a cantina that would have featured rooftop flamenco dancing and an extensive tacos and tequila-based menu.

The renovation never happened, of course, and the indigenous apartment building has continued to be slathered in alternating coats of graffiti and extensive mural work.

Though this is not a case of an uninteresting building that has lost all hope. It needs a good gutting, yes, but it’s an architecturally interesting multifamily building nonetheless.

Constructed in 1926, Bennett, an engineer for the Southern Pacific Railroad, built the apartments to house himself and three other tenants. It was a packed house upon build-out.

At two stories, it still features original brickwork positioned atop its poured concrete foundation. A diamond panel on the fascia above the porch stands out as a relic of an earlier era, a classy touch amid the spray-painted brick seen today.

The flat-top roof probably needs some work to make it into any envisioned nightlife spot, but the first-floor porches are in surprisingly solid shape. Replacing any remaining windows is a must.

The second-floor balconies were altered mid-century when A/C units were installed, but otherwise, little esthetic work has been done to the place. A future tenant will find that it is a rather spacious building that can make a mean bar, restaurant or venue when the time (and capital) arrives.