Get Your Boutique On: Roosevelt Row

It is no secret that the neighborhoods in Downtown Phoenix have undergone several transformations, serving a variety of purposes over the years. But the houses that date back to the early 1900s have taken on a new and original purpose. Entire blocks have been infused with young, artistic and optimistic life. 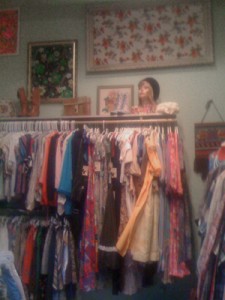 With a “do-it-yourself” attitude and “reduce, reuse, recycle” taking on a completely new meaning during a recession, it’s no wonder the quaint, local businesses are flourishing.

Roosevelt Row, a nonprofit organization, has been spearheading the movement to further the distinct character and assets of its Evans Churchill neighborhood and to nurture a diverse, walkable urban environment. This includes a uniquely Phoenix breed of boutiques in the area. Many of the boutiques that make up Roosevelt Row have become a hub for people who wish to stay chic and trendy while not emptying their wallets.

Butter Toast, MADE and Conspire are three boutiques that are in the thick of it, all the while remaining completely different and distinct from one another.

Butter Toast has a very unique twist to what could be construed as another vintage shop. Part-owner Traci Nelson says that to ensure the “usability and modernization” of the boutique’s vintage clothes, she implores the talents of a seamstress. While they do not advertise alterations as a service provided, they do alter clothes brought into their store in need of a slight pick-me-up.

Now in its third home on 6th Street, Butter Toast seems to be flourishing with it unique take on vintage clothes. 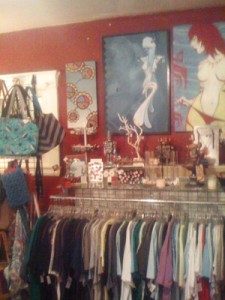 Nelson says they pick each item personally for the store and ask the question, “Is this modern and wearable?” As ironic as it may seem to look at a piece of vintage wear and ask if it’s modern, that’s exactly what sets Butter Toast apart from other vintage stores.

Along with the eclectic clothing variety offered at Butter Toast, they have recently introduced Merry May, a DIY company offering its merchandise in a smaller room located within the store. Owned and operated by Ashley Eaton, it offers a variety of crafty options.

Conspire, notoriously breathing life into the corner of 5th and Garfield streets, not only supports local Phoenix artists, but also gives them a very unique platform to showcase their art.

The space is collectively owned and operated by about 10 local artists, and offers boutique space featuring an espresso bar, an “anarchist library” and neighborhood hangout. The establishment is undoubtedly unique in not only the merchandise available, but also the concept itself. 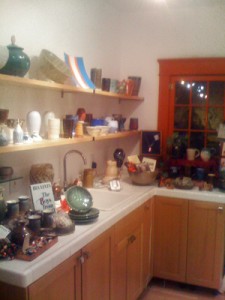 Star DeLuna is one of the featured artists selling homemade gems like jewelry and magnets.

“The foot traffic through here has been awesome, especially on First Fridays,” DeLuna says.

Similar to both Butter Toast and Conspire, MADE is very aware of the foot traffic it receives due to its location. MADE, which opened five years ago, offers a wide variety of options. Always thinking locally, the boutique features everything from custom baby clothes to what some might consider controversial art.

Owner Cindy Dach that they couldn’t have found a better location.

“I love where we are,” she says. “First Friday alone brings in so many people who might not have stopped in before.”

Whether you’re looking for a one-of-a-kind purse, a vintage sundress or you just want to satisfy your local art craving, Roosevelt Row is a must see.