‘When in AZ’ Monthlong Celebration is Off and Rockin’ 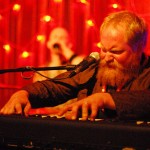 Sweetbleeders will play the 'When in AZ' Show on Sep. 10

First Friday on September 5  kicked off the When in AZ music compilation festivities with a bang! Drawing what seemed like record-breaking crowds Downtown, with Roosevelt Street closed from 3rd to 7th streets, Modified Arts was open and ready for all to enjoy the fresh tunes of Matthew Reveles, Stellaluna and Flyaway Tigers, who opened the show. As the music continued on, more people wandered in and out to catch a glimpse of who was on stage. With each band that played offering a different sound, it was exactly what Nick Kizer, organizer of the compilation, envisioned it to be. In between the Stellaluna and Matthew Reveles sets, Nick Kizer and Renee Saxon from the Phoenix Conservatory of Music stepped on stage to say a few words about the project itself. The true vision for the compilation is to support the arts and provide funds to such charitable organizations as PCM and Ear Candy, both nonprofit organizations doing the best they can to provide music education to children. Many people were on hand volunteering their services to sell merchandise and collect donations as the night went on. With Matthew Reveles winding the evening down, a sense of accomplishment was felt throughout Modified.

If we continue to support and nurture the talent we have, Phoenix will become a music mecca. As River Jones, founder of River Jones Music, which has brought us such talent as Courtney Marie Andrews and Michelle Blades, said, “When it comes to music, there are no boundaries. The goal is to bring all of Arizona together to create one scene and put Arizona on the map as a large music community.”

If you missed the first two shows to kick off the CD release, head down to The Rhythm Room Thursday, September 10 to see Treasure Mammal, Colorstore, Lonna Kelly, Sweetbleeders, Coats & Villa and special guest DJ Sleepy Cub. For an $8 donation at the door, you receive a download card for the 55-song compilation. Each artist is featured on the compilation and will perform their covers from the album along with their own original music.