After Hours Creative — Recreating Downtown One Lot at a Time

On Thursday, August 20, I attended the monthly Get Your Phx (Fix) event at After Hours Creative. Get Your Phx is a monthly gathering of approximately 40 urban enthusiasts who meet at various studios, restaurants and galleries in and around Downtown Phoenix. According to organizer Ken Clark, the goal of Get Your Phx is to support the people and projects that have “taken a risk” in Central Phoenix.

After Hours Creative definitely fits the bill of a project that has taken a risk in Central Phoenix. The mixed-use building is the fulfillment of a dream for owners Mike Oleskow and Russ Haan. Not only is the 7,400-sq.-ft. building home to their business venture, After Hours Creative, and their gallery, After Hours Gallery, but also their incredible 1,100-sq.-ft. condo overlooking Central Avenue — all on a quarter-acre single-family lot bordering the Willo historical neighborhood. Mike and Russ wanted a building that would not only meet their needs today, but also the needs of owners 50 years down the road. So, while the building’s current configuration hosts an art gallery, graphic design studio, private office and condo, it is designed in such a way that one could easily imagine the building hosting a restaurant, law office, clothing store, tattoo parlor or more living spaces in future iterations.

During the course of the evening, architect Scott Roeder, the project manager that turned Russ and Mike’s dream into a reality, showed guests around the building. The primary goal of the project was to maximize the floor area of the property while conforming to the commercial zoning restrictions of two stories. To manage this, Scott studied the ins and outs of the city ordinances and determined that while technically limited to two stories, buildings can have mezzanine levels as well as basements. As a result, he and his team were able to design four levels of living, work and storage space all within the official two-story limit. The building’s close proximity to the Central Avenue light rail line allows it to take advantage of the transit overlay district provisions regarding parking and lot coverage. However, the project did not receive any of the tax incentives or subsidies that major developments elsewhere in the city, such as CityScape or CityNorth, have enjoyed.

Everyone I spoke to was in awe of the building and what Russ, Mike and Scott and his team have achieved. They all agreed that Phoenix, especially Downtown Phoenix, needs more of this type of space to flourish as a dynamic hub for the region. Alas, this is the only example of a small-scale, multi-use infill development around. Jim McPherson, Vice President of the Arizona Heritage Foundation and member of the Downtown Voices Coalition, would like to change this. During the event, he talked about the need to support this type of development throughout Downtown and called on City Hall to initiate an urban infill task force to investigate ways to encourage these projects in the Downtown core.

If you haven’t been to the After Hours building yet, put it on your “must-see” list. The gallery is open weekdays from 10-5, as well as First Fridays.

The building, including the condo, is also available to rent for private engagements, and is located at 116 W. McDowell Rd. See www.afterhoursgallery.com for more information, or contact After Hours Creative at www.ahcreative.com to schedule a visit. 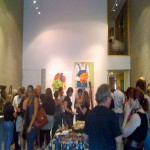 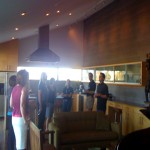 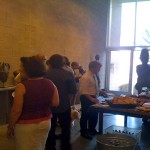