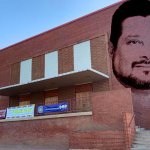 Phoenix’s downtown arts community has experienced massive changes over the last several years as the wave of luxury housing and business development pushed many creatives out of the city’s core.

While the number of art galleries, and creatives living in the area, has dropped substantially, one bright spot has been the resilience and growth of downtown’s long-time music community, like what’s being seen in the Evans-Churchill neighborhood today.

Nowadays there’s seemingly more bands playing on the streets of Roosevelt Row during a First Friday than there are galleries to visit, with neighborhood businesses like Songbird Coffee & Tea House and Bud’s Glass Joint also hosting patio concerts during the monthly event; The Lost Leaf bar (on 5th St.) features live music 365 days/year; all-ages venue The Trunk Space has several shows every week, and is across the street from Phoenix Center for the Arts (which offers music classes); nearby MonOrchid gallery hosts the Downtown Chamber Series regularly; neighborhood jazz club, The Nash, is world-renowned; Margaret T. Hance Park is a music festival site; the DeSoto building, on Central Ave & Roosevelt Street, is slated to become a music venue; and the Meow Wolf hotel planned for the area will have a performance space that includes a music component.

Thrown into the middle of this mix is the possibility of a new performing arts center – with a mid-sized concert hall for local and touring groups – proposed for the red brick North building, located on the Phoenix Center for the Arts (PCA) campus, along the eastern edge of Hance Park, on Third Street.

It’s a possibility put forth by The Phoenix Music Coalition (PMC), which includes PCA, Cultural Coalition, Orpheus Male Chorus, Phoenix Children’s Chorus, and Phoenix Chorale. The PMC formed in Spring 2013, with the organization conducting a feasibility study (indicating it can raise $5 million) for such a center in early 2014.

A proposal for this performing arts center, with its focus on musical programming, was then officially submitted in response to City of Phoenix issuing a Request for Information (RFI) for the North building in June 2016. It was one of three proposals received to activate this long dormant property.

However, all the proposals have languished since that time, despite RFI proposals typically being followed by the city’s more formal Request for Proposals or Request for Qualifications, in short order, as the next step taken to activate a site. Now, Phoenix city councilmember Michael Nowakowski wants to effectively pass on the proposed possibilities, in the city’s continuing quixotic quest to find a location for the Latino Cultural Center.

Nowakowski co-chairs the city’s new ad hoc Latino Cultural Center committee, which has re-energized the search since being formed earlier this year, and he’s also vice president of communications for Radio Campesina, a network of radio stations (including one in PHX) with Spanish-language programming, which, going by his comments to the committee in late May, informed his decision-making process. As first reported by Phoenix New Times, he stated, “I run a Spanish radio station, and it’s a problem trying to find a big enough space to do our events. Often the city streets are too hot, so I’m leaning towards something with a park” when recommending the North building location for the Latino Cultural Center.

However, Nowakowski has yet to garner wide community support for this recommendation.

Ad hoc committee member Casandra Hernández, who also heads Latinx organization CALA Alliance, has expressed concern about rushing the process without due community input on these new developments. The current president of ALAC (Arizona Latino Arts and Cultural Center), Elizabeth Toledo, favors the Hyatt Regency garage, one of the other potential locations on the city’s short list – which is also ALAC’s current home. Cultural Coalition, which is dedicated to the education, promotion and development of indigenous artists in Arizona and is part of the group proposing a performing arts center on this site, has suggested the city choose a different location for the Latino Cultural Center.

For now, the committee continues researching possible locations to find the one that works best for both a Latino Cultural Center and the Phoenix community as a whole. The short list still includes the North building, its fate caught in the limbo of the city’s inaction on those original RFI proposals.

And while the draw of live music happening throughout the downtown core continues to grow, Nowakowski has yet to embrace this local creative synergy being witnessed on his watch.

Instead, so far, he’s opting to overlook it in favor of horse blinders focus on the North building for the future Latino Cultural Center, a rush to decision that lacks meaningful chance for up-to-date community input, while simultaneously sidelining a proposed use for the site that could become the “crown jewel” of a burgeoning music community being heard in the neighborhood around it.

City staff will report back, detailing more on each option, at a future Latino Cultural Center ad hoc committee meeting.