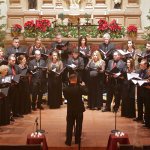 Maybe it’s the crisp bite of a Midwestern Christmas you crave along with Scandinavian cookies like krumkake and rosettes, or perhaps you love the clear desert atmosphere — and the absence of blizzards — as happy caroling heralds the season. Whatever you seek in Christmas music, you’ll find a taste of a beloved Minnesota tradition at the Phoenix Chorale’s concerts in Sun City, Phoenix, Scottsdale and Paradise Valley from December 14-18. A Chorale Christmas brings together cherished favorites and new classics in a program that’s perfect for all ages.

“I’ll bring a piece of St. Olaf and Minnesota with me to Arizona,” says Armstrong with a smile. “I constructed a program that would be a smorgasbord, to reach out to a broad audience.” His choices include many settings by his former teachers, students and colleagues in highlights from past festivals. Many of the songs were commissioned by Armstrong for the St. Olaf Choir.

Armstrong grew up on Long Island, although his parents were raised in St. Thomas and Antigua. “This was a house where a lot of folk and popular music of the Caribbean and the West Indies was heard in our family gatherings,” he explains. As a youngster he grew up with a “better-than-average singing voice” in a Lutheran church, he says, and joined the American Boychoir. “That was my introduction to choral music at the highest levels,” says Armstrong, recalling performances at the White House, for the Pope, and with Eugene Ormandy and the Philadelphia Orchestra. In high school the sound of St. Olaf’s excellent Chapel Choir drew him to the college for his bachelor’s degree. Armstrong returned to his alma mater as a professor of music after earning advanced degrees at University of Illinois and Michigan State University and teaching in Grand Rapids for ten years.

A Chorale Christmas opens with a short, exuberant motet written by Felix Mendelssohn during his time as choirmaster at the Berlin Cathedral. Titled Songs Old and New, the concert’s first section moves on to the “new” with tunes from the 21st century. Former St. Olaf student Stanford Scriven created a new setting of “Christ the Appletree,” and Armstrong says, “He’s crafted a melody that graphically and picturesquely lifts up the text. The fabric, the texture in which he sets it illuminates the text in a very wonderful way.”

Norwegian composer Kim André Arnesen — whose music is influenced by a youthful appreciation of MTV — collaborated with Welsh lyricist Euan Tait on the 2016 Christmas Festival theme “Light Dawns, Hope Blooms” to write the refreshing “His Light in Us.” “The meter of the text suggests a specific time signature, and the structure of it says something about the phrasing,” says Arnesen. “Where the essential words are placed can say something about articulations, tempo and rhythms…if there are many soft or hard vowels and consonants,” he continues, describing his creative process. “There’s quite a lot of music in a text.”

Arnesen adds, “I think that in both my sacred and secular music there’s a certain contemplative feeling that is part of my inner spiritual room.”

The program continues with “The Word Was God” from African-American composer and conductor Rosephanye Powell. “I wanted this to represent a diversity of styles,” says Armstrong. “This is her own anthem — a very syncopated, rhythmic interpretation of the Biblical text, and it’s powerful.”

For the concert’s second section, Christmas in the New World, Armstrong takes the Phoenix Chorale first to Latin America (Toda la tierra), then to the Huron tribe of Canada for “’Twas in the Moon of Wintertime.” The conductor revisits his heritage with “The Virgin Mary Had a Baby Boy.” “This captures a very distinctive part of my own upbringing, and arranger André Thomas incorporates steel drum — it gives the flavor of the Caribbean,” says Armstrong. “It’ll really entice the tastebuds of the singers and the audience as well.” The Chorale drops into the Midwest for the third segment, Minnesota Ornament, featuring composers associated with St. Olaf. “Kenneth Jennings was my predecessor as conductor of the St. Olaf Choir and artistic director of the Christmas Festival — I sang as a student under his leadership,” says Armstrong. “The ‘Summer in Winter’ carol is one of his very charming little pieces, based on the famous text of 17th-century English writer Richard Cranshaw.”

“In the Shepherd’s Keeping” comes from Charles Forsberg, who retired to Scottsdale after nearly 40 years of teaching theory and composition as a professor of music at St. Olaf — he was also one of Armstrong’s teachers. Forsberg just completed a trombone concerto and continues to compose for orchestra and choir.

Based on a Scandinavian folk tune, the song begins with a pristine solo violin, joined by a high voice singing in Norwegian, “Shepherd tending, flock grows weary, day and night go hand in hand.” Forsberg himself added verse in English: “Taste and touch the breath of time; God of peace, replenish my soul.”

“I wrote this piece in late 2012 for a former student whose friend had died…and my brother had died earlier in the year from leukemia,” says Forsberg, recalling the inspiration for the work. “It’s a piece about strife and salvation, to not be fearful because we’re never far from the shepherd who watches us.”

The program continues with the sweet mash-up “Night of Silence/Silent Night.” “The message of Dan Kantor’s piece is one of social justice, care for the neighbor, care for the environment — it’s a very poignant piece,” says Armstrong. Another of the conductor’s former teachers, Robert Scholz (“my musical godfather,” Armstrong calls him) arranged the traditional English carol “The Friendly Beasts,” and former St. Olaf associate dean Carolyn Jennings set “Ding Dong! Merriily On High.”

A Chorale Christmas ends with Christmas Favorites, including “Carol of the Bells,” “The Twelve Days of Christmas” and one of Armstrong’s own favorites. “As a kid in the ‘60s and early ‘70s I grew up watching A Charlie Brown Christmas,” he says. “Even now, every year I try to spot when it’s on, even though I have my own DVD.” The Chorale will sing Vince Guaraldi’s “Christmas Time is Here” from the Peanuts special, and finish with “O Come All Ye Faithful.” “That’ll be a great way to bring the audience and the singers together for a combined bit of singing,” says Armstrong.

Drink your fill of Yuletide spirit with the Phoenix Chorale and Anton Armstrong at A Chorale Christmas in five performances around the Valley (Dec. 14 at American Lutheran Church in Sun City; Dec. 15 at Trinity Episcopal Cathedral in downtown Phoenix; Dec. 16 at La Casa de Cristo Lutheran Church in Scottsdale; Dec. 17 at Camelback Bible Church in Paradise Valley; Dec. 19 at Brophy Chapel in central Phoenix).

Interested in reading more? The Grammy-winning Phoenix Chorale is adding a creative twist to their search for a new artistic director.  The list of finalists is down to four, and each will lead a concert weekend during the Chorale’s upcoming 2018/19 60th Anniversary season. Read the introductory interviews of two potential candidates by guest writer Katrina Becker.