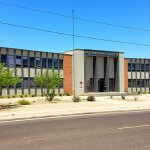 Wire*— The free, family-friendly Grand Avenue Festival (GAF), Saturday, November 10, 11 am to 8 pm (“After Hours” from 8 pm to 10 pm), will showcase three historic sites during the annual “Under the Vintage Roof Tours,” which falls on Veteran’s Day. The free tours are hosted by Arizona Preservation Foundation and Phoenix Rising Tours. The 1963 National Guard Armory, never open to the public before, will be a highlight of this year’s tour.

The tours begin at the Armory, 1614 W. Roosevelt St., at Noon, 1 p.m., and 2 p.m. (free, all-day parking on the east side of the complex). During the tours, visitors will learn about the history of Grand Avenue, specific building histories, and be introduced to building owners who will tell their own stories. At the Armory, the main building (with an unusual curved brick facade) sits on a city block and has been converted to art studios, workshop, and creative space, with exposed interior brick, polished cement floors, and exposed trusses, with several former ammunition vaults converted to offices. Tour-goers will meet Jason Hugger and tour his painting studio, and visit the maker space of Spectacle, two of the building’s early occupants. Visitors will learn about Phase 2 of the project, including new live/work space built on the west perimeter of the block. The “Jam Tram” will connect to the rest of the Festival route throughout the day from this location.

Attendees will then walk to the Phoenix Four Square Church, 1206 N. Laurel Ave., located at the site of the dramatic domed La Luz del Mundo Church (in-progress). Visitors will tour the interior of the quaint, circa 1939 adobe church (and hear a little about the large domed church next door which has been under construction for about 10 years, built by hand by church volunteers).

Lastly, the group will tour interiors of some of the Shaughnessy buildings, 1500 Grand Ave., constructed on the site of an early tourist court originally operated by the family, with the first commercial storefronts built in the late 1920’s. The site currently includes the Bikini Lounge (a “dive bar” in business since 1953), in a building that originally housed the 1928 Clarence Shaughnessy Grocery. The last of the five storefronts was built in 1948 and housed the Thomson Heating and Cooling company.

During the Festival, history buffs can view photos of early Grand Avenue at the historic Bragg’s Pie Factory building, 1301 Grand, in a pop-up exhibit curated by Douglas Towne, Editor of Arizona Contractor and Community Magazine (among many other writing and publishing gigs). Photos and memorabilia provide a fascinating snapshot of the early days when Grand Avenue was the other “Mother Road,” US Route 60, entering downtown Phoenix from points west.