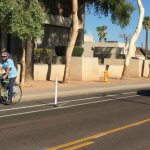 “This is just the first step in our effort to build safe, protected bike lanes in the City of Phoenix,” said Mayor Greg Stanton. “We’re sending the message that everyone deserves to feel safe on our streets – and these new protections have already improved the transit experience for drivers, cyclists and pedestrians.” The new protected bike lanes along this stretch of 15th Avenue feature a painted buffer zone with flexible bollards that give bicyclists more protection while clearly signaling to drivers the potential presence of bike traffic. The bollards will also help discourage vehicles from illegally parking in bike lanes. The City also added green paint spot treatments to the new bike lanes to help increase visibility and identify areas where bicycle and car traffic might mix.

“The most successful cities in the country – and the world – build their transportation networks around people, not just cars,” said Quinn Tempest, member of the Citizens Transportation Commission. “This first protected bike lane is a huge step forward for Phoenix. As a bicyclist and T2050 Commissioner, I see this as a symbol that the City is serious about creating a future transportation network where every mode has a safe and equitable stake on the road. This first protected bike lane is a promising beginning to realizing that vision.”

This project was part of the City’s 2014 Comprehensive Bicycle Master Plan, a vision for a well-connected bicycle transportation network that makes bicycling safer and easier throughout Phoenix.

As part of the bicycle master plan additional improvements have also been made along the 15th Avenue corridor to enhance mobility and safety. To help reduce conflicts between bicyclists and turning motorists, in 2015 the roadway striping at major signalized intersections on 15th Avenue between Dunlap Avenue and Van Buren Street was reconfigured to create dedicated lanes for bikes and buses only.

To improve bike lane connectivity on 15th Avenue, this past summer through a public involvement process that included several presentations made to the community and a public meeting, the Street Transportation Department proposed and extended the existing bike lanes on 15th Avenue that terminated at Van Buren Street further south to the I-17.

The proposal called for the removal of a traffic lane, adding a new two-way left turn and creating bike lane separation through the use of painted buffers and vertical bollards at select areas. With the addition of the new bike lanes on 15th Avenue between Van Buren and the I-17, 15th Avenue now features a nearly 10-mile continuous bike lane system between Dunlap Avenue and the 1-17.

The City will continue to assess new and existing bike lanes and additional mechanisms for creating separation between cars and bikes to promote safe traffic flow for all modes of transportation.

For more information about the City’s bicycle program visit here.