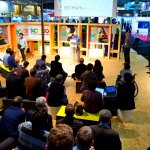 A workgroup with a good solution is going to be on a flight to Barcelona, Spain, in November. That’s the end game for the third Phoenix winner of the 2017 Smart City Hack. Kicking off with an Ideathon at Galvanize in the Warehouse District on Saturday, July 8, the Smart City Hack competition brings together public officials with challenges and teams of technology developers looking to create a solution for local government.

This year, the challenge is focused on applications relating to transportation, health and wellness, energy and sustainability, civic engagement, and culture and tourism.

“For the past two years, we’ve seen some of the best and brightest entrepreneurs present their civic solutions through the Smart City Hack,” said Phoenix Mayor Greg Stanton. “We’re not just inviting local inventors to compete, but also to show how technology can improve or enhance the lives of our residents.”

Winners of the Phoenix Smart City Hack will receive $3,000 in cash and an all-expense paid trip to the global competition in Barcelona later this year.

There’s a good precedent for whomever gets into the local competition as the two previous local winners garnered last year’s international championship and were runners-up in 2015. The Hack is open to any Valley entrepreneur who wants to find a challenge and develop a technological solution.

This year, Arizona’s Institute for Digital Progress (IDP) is running the Hack. The nonprofit will issue the Cox Communications-funded awards for first place and a $1,000 second place and $500 third place cash award.

“This is where City Hall meets YesPHX meets the development community,” said Dominic Papa, executive officer for IDP. “At the Ideathon, local officials talk about the challenges and inefficiencies faced by cities, and teams of developers come back with ideas developed over the summer.”

Papa said that there are four primary categories (transportation, health, education and sustainability) in which groups compete and one wild card category. Although development teams specify the selected category, only one winner goes on to Barcelona.

Last year’s Phoenix winner, Storage Together, brought honors home from Barcelona for a group of Grand Canyon University students as the international champions.

“Technology is more prevalent than ever; every company is a tech company in some form,” said Councilman Daniel Valenzuela, chair of the Downtown, Aviation, Economy and Innovation subcommittee. “This is an exciting opportunity for groups to compete to come up with bright ideas to make cities more efficient and advanced.”

Valenzuela said that the Hack is a valuable tool for everyone. It provides real solutions to real problems, but it also puts the spotlight on the Valley as a place where technology solutions and entrepreneurs are abundant.

“The (Ideathon) does great things for the groups,” Valenzuela said. “It gives a taste of competition, and it gives the opportunity to build teams to become early stage successes.”

The councilman said that the Hack shows how much talent is available in the Valley. “When a team from Phoenix competes on a global stage at the Smart City Expo in Barcelona, it sends the message to the rest of the world that our community is supporting innovators and they’re finding success here,” Stanton said.

Though Phoenix is the only Cox Communications Gigabit Community in the Valley, Mesa and Scottsdale Mayors John Giles and Jim Lane are joining Stanton and Valenzuela this year to promote the competition.

The Ideathon, set for Saturday, July 8, at Galvanize, is the kickoff event to help entrepreneurs formulate their concepts and hear directly from city officials. From June through September, groups will have opportunities to engage local professionals as they move from concept to competitive product.

The submissions from each group are due September 30, with the finalists selected by October 3. The Phoenix-area Hack competition takes place in October with the Smart City Expo set for Barcelona November 14 to 16.