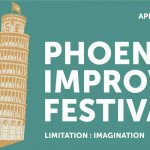 Improv is unpredictable and that’s exactly what makes it so compelling. The off-the-cuff, collaborative performance genre will be in the spotlight April 20-22 as the 16th Annual Phoenix Improv Festival takes the stage at downtown’s Herberger Theater Center. The three-day event will feature workshops and performances from local, national and international acts and will offer theater-goers a peek into how improvisation is performed locally and around the world. The festival will also feature international ensemble performances with a group of improvisers from countries including Canada, Finland, The Netherlands, Germany, Australia and the U.S. The performances will be directed by Neil Curran of Ireland.

The full schedule of performances is available online, as well as information about performer workshops. Workshops will be held Saturday, April 22. More information is also available online, including when, where and who will be teaching the classes. There is a $65 registration fee for the workshops.

The Festival is produced by CareFree Write Productions, a 501(c)3 non-profit organization which looks to serve as a support network for developing local artists, an educational resource for the community, and an integral part of Phoenix’s growing cultural movement.

Tickets: Tickets are $10 for Thursday evening and Saturday matinee performances and $20 for Friday and Saturday night mainstage performances. Tickets are available from the Herberger Box Office by phone at 602.252.8497 or online at herbergertheater.org. Patrons are encouraged to purchase by phone to avoid a web service fee. Discounts for seniors, students and military are available.