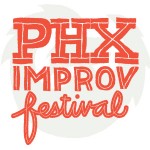 It takes almost a whole year to coordinate the Phoenix Improv Festival, so it’s kind of funny that after all that planning, no one really knows what’s going to happen. Of course, the planners wouldn’t want it any other way, because after all, it’s improv – that unscripted, anything-goes style of theatre that famous names like Tina Fey, Stephen Colbert, and Bill Murray all have on their resumes.

In its 11th year of celebrating the art of unpredictable comedy performance, the Phoenix Improv Fest takes the stage at Downtown Phoenix’s Herberger Theater Center over two nights on April 27th and 28th. Friday night will feature some of Phoenix’s best local improv talent and Saturday night will highlight national troupes from places like Chicago, Los Angeles, Austin, and Minneapolis.

According to José Gonzalez, local veteran improv actor, instructor, and one of the PIF coordinators, “It’s the event that we look forward to each year on the local level. It’s also a really great event that people are aware of on a national level, as well.” While the Phoenix Improv Fest is a much-anticipated annual event, improv can also be found in Uptown every weekend at The Torch Theatre, Arizona’s only venue for long-form improv comedy. From a space that was once a barbershop at Central and Camelback, they offer live performances every Friday and Saturday night. Audiences can catch a variety of shows like the “Skewed News Hour,” which runs wild with headlines ripped from the day’s news and “The Revolver,” a rotating blend of local shows and teams.

If you’re inspired to get on stage after witnessing the pros at these performances, you can sign up for improv workshops at The Torch Theatre, including a free drop-in workshop on Thursday, May 3rd. Complete class and performance listings are available on their website.

Gonzalez, who performs and teaches at The Torch, has been there since its inception. He says it was important to establish the theatre in central Phoenix because it had the right vibe and because many of their graduates and students are members of the downtown arts scene.

“We gravitated to downtown and Central Phoenix because there was so much potential and the city was gaining momentum as far as having the kind of people who want to go out and do things and who are really interested in doing fun and interesting things in the city.”

Photos courtesy of The Torch Theatre.