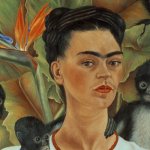 Coming to the Heard Museum April 11 to August 20 are thirty-three works from two of Mexico’s most famous artists, Frida Kahlo and Diego Rivera. Phoenix will be the only North American stop on the exhibit’s world tour. The works, from the Jacques and Natasha Gelman Collection, are to be exhibited in the newly opened Virginia G. Piper Charitable Trust Grand Gallery. The Gelman’s were Mexican-based European emigres who were friends of the artists.

On view will be Kahlo’s Self Portrait with Monkeys and Diego on My Mind, and Rivera’s Calla Lily Vendor and Sunflowers, as well as more than 50 photographs taken by Edward Weston, Lola Álvarez Bravo and Frida Kahlo’s father, Guillermo Kahlo, among others. The exhibit also will feature clothing and jewelry of the style and region that Frida Kahlo wore. Kahlo and Rivera met in 1928 and were married in 1929, according to fridakahlo.org. Despite a divorce in 1940, the pair eventually remarried and remained a couple until Kahlo’s death in 1954 at the age of 47. During her career and after her death, she was mostly know as the wife of Diego Rivera. Her work did not gain its iconic status until the 1970s when activists and art historians rediscovered her. By the 1990s, her art was broadly known and she had become a symbol for the LGBTQ movement, Chicanos and feminists.

Admittance to the exhibition of $7 in addition to general museum admission. Admission is free to members at the Experience Frida and Diego level and above. For more information on membership, please visit the Heard Museum’s membership page.