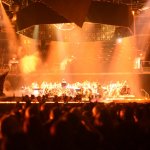 You didn’t need to be a fan of the Emmy Award-winning HBO series Game of Thrones to have appreciated Sunday night’s Game of Thrones Live Concert Experience. The massive musical and visual production proved this as the seats of the Talking Stick Arena in downtown were filled to the brim with diehard fans and series strangers alike for the Phoenix stop on its North American tour. The attendees’ anticipation was met with a basketball court-sized performance stage, crowned by larger-than-life digital LED screens emblazoned with images of the sigils of the houses of Essos and Westeros. As maidens in petticoats mingled with men in business suits and locals brushed elbows with out-of-towners, the lights dropped and a wave of excitement rippled through the crowd.

Celebrated composer Ramin Djawadi, best known for his iconic work on the GoT series, introduced the evening as “an experience unlike any other,” truly setting the stage for an astonishing adaptation of the epic worldwide phenomenon from the mind of writer George R.R. Martin. With a flick of the wrist, the full orchestra struck up the iconic Game of Thrones opening theme as the stage groaned and cracked with a belch of fire and smoke to reveal the Iron Throne in all its horror and glory. Accompanied by a full choir and several soloists, the immersive spectacular was in full swing and each member of the audience was on the edge of their seats, eyes wide in awe and jaws gaping as we collectively held our breath until the number had ended.

The evening unfolded with songs that included “Rains of Castamere” and “The Bear and the Maiden Fair,” each of which was met with stunning imagery from the series that highlighted epic moments or beloved characters, either triumphing over their enemy, or meeting their grizzly fate. Audible reactions from the audience could be heard accordingly. “Shame” was shouted from the crowd as Cersei Lannister atoned for her sins, cheers went up as Daenerys Targaryen conquered her enemies and moans of lament were heard when ‘’poor Ned lost his head.” Though each of the songs tugged at the heart strings of every on-looker for one reason or another, there was an equal amount of beauty to be found in not only the visual effects, which included falling snow, a growing Weirwood Tree and green Wildfire whose heat could be felt throughout the stadium; but also in the playful interactions of the solo musicians, even mimicking a sword fight with their bows at one point. The vocals of the lead singer and the full choir made the experience that much more powerful as they harmonized with the bold sounds of hard notes competing for attention, mirroring the relationships between the series characters. Whimsical instruments graced the stage giving insight into the unique sounds laced throughout the show that included a duduk, a didgeridoo, a dulcimer and even a 12-foot reverberating instrument made specifically for the performance.

Whether you are a fan of the series or not, the experience was brilliant, enthralling and mesmerizing. It took you on a journey through the realm of the Seven Kingdoms and provided a glimpse into the lives of the characters that make up the “spokes on the wheel.” Not only that, it was presented in such a way as to not be forgotten.  Truly, this was more than just a well-funded series recap, it was a step into the future of stadium performances and live experiences.