Phoenix House Fest: A Music-Infused Picnic for All Ages 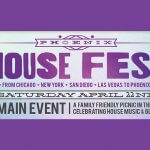 Presented by Relentless Beats, the festival was designed to “unite diverse crowds as well as spread the message of Love + House Music and further expose our children to good music from an early age & upwards,” according to the festival’s Facebook page.

“This is not the same house you’d hear at your typical EDM show,” House Fest Phoenix founder Rani Garfeh said. “This is the real house music.”

House was created by club DJs and music producers in Chicago in the early 1980s (think of it as the early version of EDM.) The genre had a lot of similarities to disco music but was more electronic and minimalistic. The repetitive rhythm of house was more important than the song itself.

In previous years, Phoenix House Festival has held their event at Eastlake Park, but for their 4th year, the festival is bigger than ever, hosting the event at Steele Indian School Park.

According to Garfeh, the main goal of House Fest is to create a family friendly event that fuses elements of community, music awareness and to help children learn about good music and the roots of music. That’s why the picnic in the park event is free and open to people of all ages. “We play mostly deep house, some latin house; although, I’ve booked a wide range of DJs from around town from up and comers to veterans and in between,” Garfeh said. “My other aim is to showcase some of Phoenix’s DJs that do events and play house music.”

The sounds of live performances and DJs will greet your ears as soon as you enter the park, including:

FOUND:RE Hotel will be the host hotel for those going to Phoenix House Fest, as well as the farewell brunch host on the final day of House Fest festivities. Special rates are available to those who book a room with the special code: “HOUSEFEST,” which can be booked here.

Admission: Admission to the daytime picnic is free! All ages are welcome.

General admission tickets (21+) for the welcome party and after party are $25, VIP Early Admission is $40. Tickets are available here.