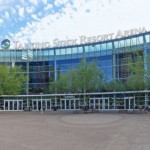 The Phoenix Suns, Phoenix Mercury and Salt River Pima-Maricopa Indian Community announced today that US Airways Center — the home of the Phoenix Suns, Phoenix Mercury and Arizona Rattlers, as well as the Valley’s premier concert venue – is poised to take on a new name, Talking Stick Resort Arena, under an agreement reached between the two parties. “Like Talking Stick Resort, this venue has become an iconic destination for entertainment in Arizona,” said President Diane Enos of the Salt River Pima-Maricopa Indian Community, the owner and operator of Talking Stick Resort. “Thousands of families and individuals have created long-lasting memories at this venue which makes its new name, ‘Talking Stick Resort Arena,’ all the more meaningful. We have a shared commitment with the Phoenix Suns in building a sense of community in the Valley and we are honored to help them provide a place for so many people to gather and celebrate.”

The naming rights agreement for the downtown venue is a multi-year deal that builds substantially on the existing agreement between the two parties. The name change will be visible throughout the facility, with Talking Stick Resort Arena being prominent on the exterior of the building; on the underbelly of the center hung scoreboard; on the arena’s rooftop; and featured on the Suns and Mercury basketball courts. The Casino Arizona Pavilion – the arena’s main lobby area – will retain its name. Additional details on the provisions of the naming rights agreement will be released as the transition begins.

“This is an exciting day for Phoenix, and another example of what an incredible partner the Salt River Pima-Maricopa Indian Community is for all of us,” said City of Phoenix Mayor Greg Stanton. “We welcome the new name and look forward to the day when a Suns championship banner hangs from the rafters at Talking Stick Resort Arena.”

American Airlines, the current naming rights partner and owner of US Airways, has fulfilled all of its obligations and elected not to extend its naming rights agreement beyond the 2014-15 season. The facility’s naming transition to Talking Stick Resort Arena, from US Airways Center, is expected to be completed before the beginning of the 2015-16 Phoenix Suns season.

US Airways Center, which opened in 1992, has earned a reputation for excellence, having received a prestigious Prime Site Award from Facilities & Event Magazine as well as a Top 30 ranking for North American Arenas from Pollstar. It hosts an average of 130 events each year with a collective annual audience of one million people. Not only is the arena the home of the Phoenix Suns, but also the three-time WNBA world champion Phoenix Mercury. It is also the home field for five-time arena football world champions, the Arizona Rattlers.

In the past year, the arena has welcomed blockbuster acts such as Paul McCartney and Lady Gaga, adding to its long list of legendary performances from U2, George Strait and Garth Brooks as well as many others. Upcoming events include the UFC’s first-ever visit to Arizona in December, Fleetwood Mac, Eric Church with Dwight Yoakam, Enrique Iglesias & Pitbull, and Bette Midler. The arena also is known for its family content and is the host site each year for Disney on Ice, Marvel Adventure and Ringling Brothers and Barnum and Bailey Circus.

The Phoenix Suns operate and manage all aspects of US Airways Center under a long term agreement with the City of Phoenix, which owns the facility.