The Neighborhood Bikini (Part 2): From the Inside Out 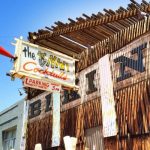 Find part one of ‘The Neighborhood Bikini’ here.

It’s a quiet Wednesday night. There’s one guy at the bar, a 50-something man with a rough-looking mustache and matching hair. David Delgado is telling him a story about his high school days on the wrong side of the tracks (the west side of town) — how no one sat on the Visitor’s side of the field during football games. Like owner Matt Tomb, David has been a part of Phoenix longer than most of the bar’s customers these days have been alive. The view from the barstool.

I ask him if it’s always this quiet on a Wednesday night. “Our biggest night is Tuesday,” he says. Then he pours a whiskey-Coke over rocks and sets it in front of me. While I wait for my friend to arrive, it’s easy to jump into any conversation that picks up.

A man and woman come in through the back door and rack up at the pool table. “It just got re-felted,” David says. The crack of the break cuts through his stories, which roll out one after the next. The backside of the bar seems to be David’s natural environment.

David and the rest of the staff here are devoted to Bikini in a way few other bars could claim. Bartenders stay here for life. New owners over the past 70-ish years have agreed one by one to respect and perpetuate the bar’s history by keeping its staff — to become the new head of the family rather than just another new bar owner. Bikini’s longest-standing staffer, Wes, has been slinging drinks here for three decades. David is the new kid, here for just a couple of years. “It’s a great place to work,” he says. An original sketch of the bar’s redesign plans, several decades ago.

Behind him is a Sailor Jerry promo statue of a hula dancer standing on a barrel and playing a uke. He tells me a customer claimed once that it was real, and that David retold that non-truth to customers for a good long while until another customer rejected the claim and David finally knocked on the side of the barrel and realized it was pure plastic. That’s how it works here. Stories get told. People play along. Conversation is unfiltered, without pretense. It seems to depend on swearing and truth. Some version of it, anyway.

What’s happened to tiki’s glory days at the edge of Phoenix?

If you stand at the corner of 15th Ave and Grand and look east, you can imagine the few buildings, the few signs of Polynesian influence that remain out there in the distance, freckling the grid. Pieces of buildings. A “hip roof” or two (all sides sloping downwards). “Tentacles,” Matt calls these signs of the past. The tentacles of tiki days gone by.

In Phoenix, tiki restaurants have all been demolished or overhauled. Islands Restaurant, The Samoan Village, and Kon Tiki Motels are all gone. Purportedly, Trader Vic’s is the only major tiki-styled restaurant chain still in operation today. Our local branch of it was shuttered several years ago.

So while Polynesian influence may still show hints of itself in some of our city’s architecture, Bikini Lounge is the one and only authentically tiki experience left in Phoenix. It’s the anchor. (Hula’s Modern Tiki is too new for that title, and in a rare display of capitalist self-awareness, it acknowledges that fact: “Modern” is right there in the name.)

Bikini Lounge, then, is one of the few independently-owned tiki places left in America, and the only one in Phoenix. Sketch of the would-have-been rear entrance. (It’s a little different in reality.)

The thought of the place’s history lights up Matt’s face.

“People, half a century ago, walked in here and had a cocktail.”

And unlike most modern adaptations, Bikini Lounge doesn’t even have to tell you it’s tiki. It was among the originals — it didn’t need to advertise the theme as part of its name. This is to a fault, however; a Google search for “tiki in Phoenix” actually excludes our city’s one iconic tiki spot. Bar owners in the ‘40s, it reminds me, weren’t yet troubled with the problems of search engine optimization.

This isn’t a sad fact, though, nor is it a play by this writer for reader sympathy. Rather, it’s a testament to the strength of this building and the people who have loved it.

In an era when authenticity matters more than money, Bikini Lounge is as authentic as it gets. It’s one of the places that gives Phoenix the history so many outsiders think our city lacks. That’ll be true as long as the front door keeps swinging open. After that, who knows. You can’t undo the end of a style, of a culture. “Once it’s gone, it’s gone,” says Matt.

One gets the feeling Matt will keep the place alive as long as he can. Tiki or not, to Matt, and to the people who live nearby, it’s still the neighborhood bar. “People, half a century ago,” says Matt, ” walked in here and had a cocktail.”

“Nobody messes with you,” Matt says. “Nobody cares. It’s dark. You’re shut off from the world. You don’t know what’s going on, and nobody’s interested in what you’re doing. They’re doing their thing.” Later, he says, “People come in here in any shape, form, or color, and anybody who judges them is pretty much asked to leave, because we don’t tolerate that.”

It’s a person’s third place, after home and work. It’s the end to the day, the escape from the week. When you go there, you bring cash. When you grab a stool, you chat up the people next to you. When you order, you hear a story from the bartender. And when you leave, you feel better. You just feel better. Because it’s the one place you’re allowed to. Because that’s the Bikini Lounge ethos.