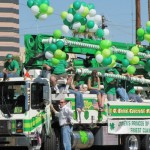 It’s a very lucky year for the Irish.

Arizona Cardinals president Michael Bidwill will lead the 33rd annual St. Patrick’s Day Parade. And he won’t be alone. Cardinals cheerleaders, flag runners, the team drum line and of course, Big Red, will flock around a float build specifically for the team’s top man, who was chosen to be this year’s grand marshal.  The parade starts at 10 a.m. March 12 at 3rd and Sheridan Streets and travels south to McDowell Road. “My Irish heritage and ancestry have always been a source of great pride for me so this distinction is particularly meaningful,” said Bidwill. “It is an honor to be associated with such a great Phoenix tradition and I’m very grateful for the opportunity.”

The popular parade, considered one of the largest and longest running in Phoenix, is also the Valley’s only authentic day-long Irish party. A fair featuring a roster of Irish rock and traditional bands, Irish food and fashion also starts at 10 a.m. at Margaret Hance Park off Central Ave. in downtown Phoenix.

This year’s Irish Person of the Year is Paul Ahern, architect of the McClelland Library, the Great Hall and the Irish Cottage at the Irish Cultural Center. The parade theme is “2016 – An Irish Centennial” which ties in with the global commemorations of the Easter Rising of 1916.

“The parade helps people to remember who they are and where they come from,” said Harry Sexton, president of the St. Patrick’s Day Parade Faire Committee. “And this year is a more poignant celebration because it is the 100-year anniversary of Ireland taking the first step towards their independence. It is always good to look back as you go forward.” The parade features everything from floats and fancy DeLorean sports cars to pipers, Irish step dancers and the stunning Sun City Poms. As always, the Phoenix Phreaks Bicycle Militia and Marcia’s Mop Brigade will entertain the crowd. St. Patrick himself plans to make an appearance along with the Arizona Law Enforcement Emerald Society and the Arizona Fire Fighters Emerald Society, with police and fire vehicles from all over the state.

The fair begins at 10 a.m.  at the Irish Cultural Center (1106 N. Central Ave.) and Margaret Hance Park. Some of the Valley’s best Irish bands including the bawdy Brazen Heads, Big Fellahs and more will perform. Traditional Irish foods will be available along with handmade quilts and Irish crafts. Catch a glimpse of the world-class “1916 Commemoration Series” exhibition on view at the McClelland  Library through June.

“It’s a chance to immerse yourself in Irish culture, food, music, dance, art and liquid libations,” said Mary Moriarty, chair of the annual fair. “Everybody is Irish for the day.” Kids can enjoy a climbing wall and bounce houses. Bring canned food for a raffle ticket and a chance to win $100. The Irish Cultural Center is raffling a trip to Ireland or a Nissan Versa lease.

Fair admission is $10 for adults 13 and older, $8 for seniors and military and free for kids. Tickets can be purchased at  http://bit.ly/1O1itBm. Parking is available for free at 1850 N. Central Ave. ( Central Ave. at Palm Lane) with free shuttles  to the fair or take the light rail to Roosevelt Street. Info: stpatricksdayphoenix.org.