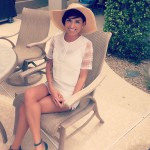 In our Urban Playground series, downtown Phoenix parent, Leslie Pico, shares her insights and tips for raising small children in the heart of our big city.

Living in downtown has its perks. It’s so much simpler to get around in the city than it is in the suburbs. I grew up in the City of Los Angeles and was no stranger to public transportation. Raising children to be familiar with it is important and gives them the confidence and life experience that will prove advantageous as they grow into adulthood. When a kid rides transit, they can have interactions with people outside the controlled environments of school and home. Now that temperatures are falling and the evenings are crisp and cool enough to go out, it’s time to explore our downtown parks. The only way we get there is by taking the light rail!

The Valley Metro Rail has been rapidly expanding since its inception in 2008 and now extends 23 miles from the Christown Montebello area to Mesa Drive and will eventually extend further to the west, northwest and the southeast Valley. The Valley Metro Rail is so easy to ride, even my seven-year-old has figured out how to navigate the kiosk and trip planner on her own. Pets are also welcome as long you secure them in a carrier.

Margaret T. Hance Park is about two and a half miles from our downtown building. Walking there may sound out of the question when you have a five-year-old, seven-year-old and two puppies. Fortunately, the city has us less than a block from the nearest light rail stop, and that means we’re only ten minutes from the park without ever having to take the car out.

We allow Ella, age 7, to use the kiosk and buy our tickets. Elisa, age 5, gets to hold them. Riding the light rail has been a fantastic tool for exposing them to personal boundaries, setting their own and respecting those of others. Our ride is short and within a few stops we arrive.

Our stop is bustling with foot traffic as it usually is this time in the afternoon. We’re dropped off directly in front of the Burton Barr Library and from there it’s a short walk to Hance Park. Hance Park is becoming an iconic landmark all its own and a diamond in the rough of downtown Phoenix. In the midst of all the tall buildings and concrete is an expansive grassy green gem of a park. It’s home to a number of Phoenix arts & culture facilities including the Irish Cultural Center, Japanese Friendship Garden, and the Phoenix Center for the Arts. It also offers Phoenix’s first dog park, set to reopen the 16th of this month.

The kids play until either they’re worn out, or I am. It’s usually the latter! On the walk back we stop into the library and play with the puppet theater while squeezing in a book or two. Children who grow up comfortable with public transit are more likely to continue to use it as adults. Those who grow up in the suburbs may unluckily be left with their only exposure to transit as the uncomfortable yellow school bus. Riding the light rail has given my kids invaluable life experience and exposures to how businesses are interdependent, reduced their apprehensiveness in regards to our differences as a people and increased their social skills.

Children who experience firsthand a real livable city are all the more likely to understand what a livable city needs. Investing in the next generation of downtown city dwellers is wise, as they will become the guardians of our great city’s livability for future generations after them.