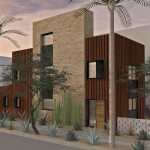 Uptown Row is more than just a townhouse project; it is yet another signal that change is coming to downtown. As an inviting city begins to take shape out of a perennial work-in-progress, developers and real estate pros are heeding the call of Phoenicians who want an urban lifestyle in their backyard.

And just like your farmer’s market goods, this is a locally procured project; the developer, designers, and real estate team are all from the Phoenix area, and each in their own way are making their mark on the growth of a new urban core.

The developer for the project, Boxwell Southwest, is located in Uptown Phoenix, and for now only takes on projects within a five-mile radius. In fact, just down the block from Uptown Row on Mariposa Street, between 7th and 3rd Avenues, you’ll find a few more projects from the firm. President Evan Boxwell sees the excitement around the project as part of a larger trend by more than just single residents to want to make the move downtown.

“The infill product … is really going to start to take off in the next several years. There’s a movement where people don’t necessarily want to be in the outskirts. It’s about creating a livable space inside the city … and it’s not frowned upon to live in the city with kids. I think that’s the kind of movement we’re going towards,” he said.

After three decades in the area, The Caniglia Group – Realty Executives have witnessed the growth of Phoenix all along the North Central Corridor, this experience making them a natural real estate partner on the project.

“It’s a shift in needs,” said realtor Erik Jensen of the Caniglia Group. Phoenix residents crave the lifestyle elements of living downtown, he explained, and don’t necessarily want to deal with maintenance of traditional home ownership.

“With the resurgence of downtown, people are starting to wake up,” he said.

“We’ve had people come from around the valley that are interested in making the move to downtown because of everything that’s happening,” said realtor Steve Caniglia, also of the Caniglia Group, such as the introduction of the light rail and the relatively recent availability of walkable and bikeable destinations. With these interests in mind, the units were built to accommodate an idealized urban lifestyle unique to Phoenix, not only with their location and proximity to the light rail, but enviable 20 x 20 rooftop decks that are a part of every unit, allowing residents to take advantage of colorful Arizona sunsets without leaving home.

The project’s design firm, The Ranch Mine, works primarily in historic districts, and has a meticulous method for ensuring new builds express the feel of the surrounding neighborhoods.

“We don’t really approach it like, ‘we want this or that aesthetic,’ but want to make it fit, and take the neighborhood to the next level,” said founder Cavin Costello, who along with his partner Claire Costello is working with Boxwell Southwest on a handful of new builds and renovation projects in the surrounding area. On new builds, they explain, the history and evolving feel of the neighborhood plays an integral role in influencing the end design.

“For example, on Uptown Row, we see a transitional component to the neighborhood,” he said, noting that the commercial and industrial components of the neighborhood needed to blend with the historic aspects and stucco style of the rest of the houses in the area.

Teaming up with Boxwell Southwest reflects a grander ambition by the local shop to have a hand in building an urban core that takes history into account by not just building beautiful living spaces, but spaces that make sense for Phoenix. As Claire Costello puts it, “We want to work with people who are invested in doing the right thing.”

As infill projects become more attractive to developers and designers, it won’t be long until central Phoenix reaches a density that requires more walkable living options, like grocery stores, and offers those wishing for a city living experience an option in their very own state.