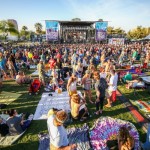 The lineup is as follows by day in alphabetical order (no set order): As Arizona’s 100% non-profit music festival, M3F is proud to continue its alliance with two local, family-based, non-profit beneficiaries: Phoenix Children’s Hospital Foundation and UMOM New Day Center. Since 2004, the Festival has raised more than $1 million for charity. $120,000 was raised for charity during the 2015 festival.

Additional details regarding the Festival will be released in months to come, including enhanced experiences for 2016, contests, promo events, and more. VIP, three-day, and single-day tickets will go on sale November 17th at www.mmmf.com. For the latest information, visit www.mmmf.com, or Facebook (www.facebook.com/mcdowellmountainmusicfestival).