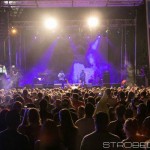 Listen up music fans, the 13th annual McDowell Mountain Music Festival (MMMF) will take the stage on March 11-13, 2016 for three full days of music, food, art, culture and more in the Arizona sun. Can’t wait to get your groove on? Presale ticket packages for MMMF 2016 will be available for purchase at a discounted rate starting on August 1, 2015. Plus, the first 150 presale purchasers will receive a special limited edition ticket package directly from the festival organizers, with all details about the package deemed “top secret.” Boasting a soon-to-be-announced lineup of both top national and local bands (with previous headliners ranging from Widespread Panic to The Roots), the McDowell Mountain Music Festival annually lures thousands of music fans nationwide to the grass-lined fields of Margaret T. Hance Park in downtown Phoenix.

Even better, the MMMF is Arizona’s premier charity-based music festival, with 100-percent of all profits donated to worthy local charities. In fact, with help from contributors, donors, sponsors and, most important, loyal fans, MMMF 2015 donated $120,000 to benefiting charities, Phoenix Children’s Hospital and UMOM New Day Centers, the largest shelter for homeless families in the state.

Previously hosted in late March, the 2016 McDowell Mountain Music Festival was moved up to take advantage of Arizona’s mild spring weather and hopefully ensure the perfect mix of sunny days and cool nights, said MMMF founder and organizer, John Largay. “Spring is an outstanding time in the Valley. We want festival-goers to enjoy the sun and music all the same, and early March is certainly the month for both.” Additional details will be released in the weeks and months to come, including enhanced experiences for 2016, ticketing options, lineups, partnerships, and more.  For the latest information, visit www.mmmf.com, or Facebook (www.facebook.com/mcdowellmountainmusicfestival), Instagram (@mmmf2016), or Twitter (@mcdowlmtnmusic). #MMMF2016