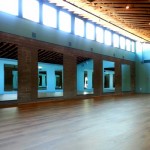 Husband and wife team Matthew and Rebecca Fritz opened their first yoga and massage studio, Sutra Midtown, in 2009. As residents of the Coronado district, The Fritz’s set out to build Sutra as a “creative collaborative,” with the idea that it would include everything they would want to have in their neighborhood.

Since then, they have expanded from their initial offering of yoga and massage to barre classes, a juice bar and cafe, art space, yoga teacher training and a regular lineup of yoga-centric events in unique locations around Phoenix. On Monday, October 19, the Sutra empire grows yet again to bring their welcoming, ego-free brand of yoga practice to a second location in Roosevelt. The first phase of the Sutra Roosevelt space is an adaptive reuse revamp of a 1940’s building and includes two open and airy studios featuring long rows of windows and murals by Eric Cox. The next phase will include a new building in the lot directly south, which will likely house another location of their cafe and spa.

We chatted with the Fritz’s to get the low down on their new yoga space and find out what they’ve got planned as they settle into one of their favorite downtown Phoenix neighborhoods.

What spurred your decision to open another Sutra location in downtown Phoenix?

Rebecca: “It’s always something we thought about doing. We always said if we were open for five years and it felt like the right next step, and the right place and the right opportunity and all the stars lined up, then we would do it. And that’s exactly what happened . . . It’s been an incredible experience. It feels like a gift. And the neighborhood has completely embraced us already. We’re not even open yet and we’re already feeling the love. It’s so exciting!” With all the growth happening in Roosevelt, where do you think Sutra will fit in?

Matthew: “I feel like we’re right at the beginning of big things that are going to happen. Within a year, this neighborhood is going to look completely different. We’re very community-focused, so I think this neighborhood is a good fit for us. We love to be out and bring our stuff to the street and make it accessible and I think Roosevelt is going to be welcoming of that. It’s just the way we like to play.”

What can we expect to see at the new location?

Rebecca: “You can expect the same community vibe, the same welcoming environment. That is never gonna change. I will be running this location at first, so I will be here, thrilled to see everyone. I’m excited to work this location.”

Matthew: “We’re mixing it up a little bit. We have a couple new class styles that will be coming on. We have some fun stuff that will be going on here, that will trickle into Midtown eventually, but they’ll launch here. We’ll have all levels of our Central Flow, which is our signature class. We also rolled out a new Maximum Flow, one of our new yoga classes. This one is more advanced, more flight, more inversions, more playtime in it, more fast-paced.” Rebecca: “We’re adding a Barre Basics, so you can create that muscle memory without dying. The other class we’re creating is a Skullpt Cardio Barre. And we’re bringing in another class style – the name is yet to be determined – but it incorporates slow flow and yin flow into one amazing experience. It’s gonna feel really good.”

Anything else you’d like people to know about your new location?

Rebecca: “I always want people to know that whatever packages they’re on work at both locations. And we’re trying to balance the schedule so at each time slot there’s something for everybody. Now that we can do that, we want to make sure we do that. I just hope everyone know how excited we are to be a part of this neighborhood. It feels like a gift.”

Sutra Roosevelt will open on Monday, October 19 and is located at 1029 N. 1st Street. They will open with a lighter schedule of classes and will eventually build up to a full roster. Find class schedules, rates and more on the Sutra Studios website.