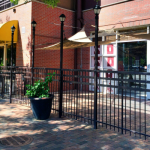 Noodle lovers rejoice! Flagstaff’s favorite nonstop noodle shop, SoSoBa, is heading down the hill to open a second location on Roosevelt Row in December, and they’re bringing late-night hours and craft cocktails, too.

Almost eight months after European-inspired Centurion restaurant closed its doors at 214 W. Roosevelt Street, SoSoBa noodles has announced they will fill the vacant space after a complete Roman to ramen renovation. While their official open date is still a couple months away, there’s still much to look forward to, and as Owner/Operator Tyler Christensen said, the concept of SoSoBa is anything but boring.

With their ever changing chef-driven menu of creatively-inspired noodle dishes, it’s safe to say SoSoBa is not a ‘traditional’ ramen shop — and they certainly don’t claim to be. In fact, they’re quite the opposite.

Instead of holding fast to tradition, SoSoBa’s menu borrows flavors from various regional cuisines. Vietnamese, Thai, Korean and even Creole SoSoBa has somehow got it covered. Gumbo meets ramen? Yep. They’ve tried it. New England clam noodle chowder SoSoBa style? It’s a thing. So, how does one actually describe concept behind the SoSoBa?

“We like to call ourselves ‘unabashedly in-authentic,’” said SoSoBa Owner/Operator Tyler Christensen. “I’m not putting-down ramen, but what we do is different.”

According to Christensen, “authentic” and “traditional” dishes have no room to grow or change, so the SoSoBa team decided to keep their culinary options open by taking the best ingredients, sides and techniques from an array of regional cuisines and expanding upon them. SoSoBa’s current menu is broken into shares, salads, and sauce or broth based bowls, and the downtown Phoenix location will have sandwiches as well. Known for their unique flavor combinations, SoSoBa’s bowls are their signature.

One stand-out bowl that SoSoBa will be sure to bring to Roosevelt Row is the meaty ‘Mic Drop,’ which involves piles of melt-in-your mouth meats — cured pork belly, carnitas, ham fries, bacon — resting atop a bed of tender udon noodles, with kimchi, a boiled egg and scallions.

“It’s basically a study in pork,” Christensen said, which is not surprising since Chef Joshua Riesner who started Scottsdale’s Pig & Pickle heads-up the SoSoBa kitchen.

Other bowls include the ‘Hostile Takeover’ with soba noodles, bulgogi beef, broccoli, mushrooms, shishito and cilantro in broth of soy and konbu; and the sauce based ‘Mothra’ also with soba noodles, green curry, tofu, bok choy and vegetables.

SoSoBa is clearly not afraid to trump tradition in pursuit of the perfect noodle, and they’re also pretty brave when it comes to cocktails. The new space on Roosevelt Row will feature a large bar with craft cocktails, wines and a long list of pretty much any Japanese whiskey SoSoBa can “get their hands on in the U.S.” Unlike Asian-inspired cocktails that are liqueur heavy and sweet, Christensen described SoSoBa’s cocktails as very well balanced. Much like their food menu, SoSoBa’s cocktails also put twist on the classics, such as their signature ‘Osaka Smash,’ which uses Japanese whiskey, muddled shiso (instead of traditional mint), fresh ginger and Giffard Ginger liqueur.

Attention whiskey lovers: SoSoBa will also offers whiskey flights so you can try more than one!

Best of all, SoSoBa will be serving their drinks and dishes at an affordable price point (current menu prices are $12 and under) and served late into the night with a 2 a.m. close Thursday through Saturday and midnight Sunday through Wednesday.

No stranger to Phoenix, Christensen has been involved with a number of the Valley’s hot spots such as The Little Woody, Linger Longer Lounge and Malee’s Thai Bistro. He has even worked at Postinos.

After opening the original SoSoBa to rave reviews last November, he said he thought it would be a great concept for a specific downtown Phoenix neighborhood that he’s always loved: Roosevelt Row. “I’ve always wanted to do something down there,” said Christensen who also expressed his admiration of Local First Arizona Executive Director Kimber Lanning, and the efforts she has made to lead the trail downtown.

And while he may be preaching to the choir, Christensen has a long list of reasons why he and his two business partners, Joshua Riesner and Joel Dry, have open SoSoBa’s second location in downtown Phoenix.

“Phoenix has arrived in my opinion,” Christensen said. “I think Roosevelt Row is a solid neighborhood.”