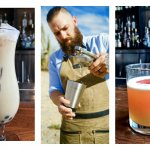 There’s some new talent behind the bar at downtown Phoenix’s Blue Hound Kitchen & Cocktails, and along with it, some innovative new drinks. Phil Clark, a veteran of the east coast craft cocktail scene, is the new lead bartender and has introduced a menu of cocktails he developed using his research-driven strategy of mapping out flavors and structures, then adding his own spin.

Originally from New Jersey, Clark’s most recent stop before coming to Phoenix was Washington, D.C., where he led the bar programs at Brabo by Robert Wiedmaier, and the James Beard-nominated Mockingbird Hill.

Clark says he’s still getting a feel for Phoenix’s cocktail scene, but has already surmised that it is young, hungry and “probably better than it thinks it is.” Like the Dr. Dre of cocktails, he’s always got a pen and paper handy, to catch cocktail inspiration when it flows his way. Clark prefers complex flavors, noting that he likes his creations to be at least two notes, preferably three.

The current lineup will be available through September 30, though the most popular cocktails will carry over to the next season’s menu.

Watch Phil Clark work his magic behind the Blue Hound bar as he creates and explains the process behind the very delicious Junglebird and Black Pepper Pink Melon cocktails:

Phil Clark Behind the Bar at Blue Hound Kitchen & Cocktails from Downtown Phoenix Journal on Vimeo.