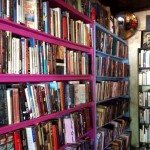 The big secret about downtown Phoenix, the thing just beyond every conversation about a certain scene, is that every new idea must not only prove its worth in profitability, but also must prove that its presence is vital to downtown even if it’s never existed there before. New businesses make the case that downtown inhabitants crave a certain service or community to gather around, and once presented with the opportunity, the people will come out in droves. Such is the case with local publishing, which has doggedly and through the hands of dedicated literary types built itself up as a necessary ingredient to the makeup of the city.

Four Chambers Press, a recent addition to the writing scene, has in less than two years found a workable rhythm of regular publications and one-off special editions, and has developed a knack for turning typical publishing events into a series of live experiments meant to find out just what locals want out of a fiction magazine.

From your standard sit-down-and-listen format, they’ve taken to the light rail to read pieces about transportation, and last year paired with the Phoenix Art Museum to present excerpts from their compilation, Poetry and Prose for the Phoenix Art Museum. Their most recent special edition was dedicated to Welcome Diner and Welcome Chicken + Donuts, and called for pieces inspired by specific places and communities, titling it, Welcome Home.

Founded by Phoenix transplant Jake Friedman, their first submission period opened in 2013, and they have since published two full issues in between their events and special editions. Their issues can be found at the valley’s original well of literature, Changing Hands, in addition to various coffee shops that dot the downtown area.

When Friedman describes finding an audience that didn’t appear to exist before, he recalls observing, upon arriving in Phoenix, that our residents have a longing for things to do and places to go. But once those places open and those services arrive, he notes, we can’t recall living any other way.

“What was I doing before this place opened? It’s busy all the time, but before that, what did we do,” he asks, reflecting most people’s feelings toward new coffee shops and bars that instantly become destinations in downtown.

The recently launched Four Chambers “Get Lit” conversation series is a perfect example. This monthly literary party takes place at recently opened Valley Bar every first Thursday, and is Four Chambers’ modern twist on classic literary salons, where writers and readers gather to talk and imbibe. While Four Chambers roams the city for new venues to bring people together, another staple of downtown continues to draw more and more people to its doorstep. On one of the most popular side streets of the First Friday route is Lawn Gnome Publishing, an independent bookstore and publisher which hosts regular gatherings out of their prime spot on 5th and Garfield Streets.

An ever-changing roster of open mic nights, meetups and events has helped draw literary Phoenicians out of their enclaves and into downtown, and established Lawn Gnome as a place for congregation within the community.

But if you want to get even more indie than an indie bookstore, take to Facebook to scour for local publishing events and homemade zines. FEM STATIC; The Paper Plane Zine; the yearly Underground Publisher’s Convention annually reintroduces these and many more to downtown denizens, who turn out more and more to be part of something that never existed there before. The unexpected events put on by Four Chambers Press, the poetry nights at Lawn Gnome, and the joyful and haphazard gatherings of local zine publishers are gaining momentum and establishing a point of orientation, out of which the homegrown writing and publishing scene is determined to grow.