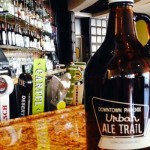 In its second year, the Urban Ale Trail is hosted by Downtown Phoenix Inc. (DPI), and gives people the chance to taste their way through an urban experience on September 12 from 1 p.m. – 6 p.m. Ale Trail trekkers can walk, bike ride or light rail to any of the 29 participating locations which are offering $1 and $2 craft beer samples as well as a complimentary snack. A spinoff of its springtime sister event – Urban Wine Walk – the Ale Trail is not only designed to encourage residents from across the Valley to experience the breadth of craft beer culture that Phoenix has to offer, it’s also designed with transportation in mind.

“The Ale Trail is really set up so you can get to know the mass transit system and learn to navigate downtown and midtown Phoenix,” said Mira Word, marketing & events coordinator at DPI. “Participants get to travel all the way from the core of downtown all the way up to midtown Phoenix,” she said. “They can hop on the light rail, use Grid Bike Share, walk, or use the bus system.”

While participants can begin their trek at any participating establishment, the Ale Trail officially kicks off at the District American Kitchen and Wine Bar at the Sheraton Phoenix Downtown Hotel. Shanna Wolfe, Sheraton’s Director of Public Relations said they are happy to participate in events organized by Downtown Phoenix Inc.

“The Urban Ale Trail is a fun event and we’re always happy to be a part of it,” Wolfe said. The event “allows District American Kitchen and Wine Bar not only to be a good community partner, but also to showcase our offerings to new audiences” said Wolfe.

And there’s a bonus for beginning your journey at the District.

The first 300 people in line receive a free (and awesome) commemorative 2015 Urban Ale Trail growler – ready to be filled up with your favorite beer.

Not an ale aficionado? No problem. The Ale Trail has something for everyone.

Maizie’s Bistro, located just south of the Central & Camelback light rail stop in midtown Phoenix is participating for their second year. This time, they’ve got a special (and spicy) surprise up their sleeve. “This year I wanted to showcase something that is on the menu that people can come back for,” Koons said.

This year, Maizie’s plans to utilize both their patio and indoor space, which will allow them to accommodate even more Ale Trail trekkers. Maizie’s Spinach & Artichoke dip will be the complimentary appetizer to accompany their $2 Michelada and ale tastings – and be prepared because it’s one of their most popular appetizers. Koons said another ‘small bites’ appetizer menu will be available for purchase.

Further south along the Ale Trail, located in the heart of the Roosevelt Row Arts District, Carly’s Bistro is a quintessential bar in downtown Phoenix. Carly’s owner, Carla Logan, is looking forward to participating in the Urban Ale Trail for a second year.

“Last year was great,” Logan said. “We saw a lot of people coming through and everyone seemed to be having a good time.”

“It was encouraging to see a lot of people taking light rail,” she said.

As for the ale, this year, Carly’s is keeping it local.

“It has been a popular offering this summer,” she said. Urban Ale trail blazers can enjoy their cold Arizona brews with Carly’s popular housemade Feta Rosa – a creamed feta dip with olive oil, roasted red peppers and seasoning, served with a warm grilled pita. For those who want to catch up on a little vitamin D, Carly’s has a new patio thanks to the Roosevelt Row Streetscape project.

As Mira Word said, for some businesses, the Urban Ale Trail is “five hours of nonstop craziness.” And this is the kind of craziness you want to be part of. It’s a chance to make new friends and to learn about all that downtown and midtown Phoenix has to offer.

“It’s a great opportunity to meet the people that live in – or just outside – your community,” said Word.

Whether you already live in the urban core or are visiting from outside the area, the Urban Ale Trail will give you a taste (literally) of urban living that will leave you wanting more.

The Urban Ale Trail includes a full day of activities happening in downtown Phoenix. Ale Trail participants are invited to end their journey at Downtown Phoenix Civic Space Park for a Marine Week concert beginning at 6:15 p.m. Maps with participating venues, live music and activities will be available on the day. For more details and a list of all participating venues, visit www.dtphx.org/aletrail. Participants are encouraged to drink responsibly, and yes, you can still get a DUI while riding a bike.