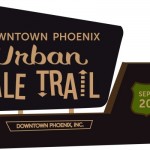 Twenty-five Downtown bars and restaurants are participating in Urban Ale Trail, led by co-sponsor District American Kitchen & Wine Bar, which will be handing out FREE commemorative Urban Ale Trail beer growlers to the first 300 hikers who visit their summit on the day of the event. Access the Urban Ale Trail map and click each participant for beer lists and pricing or use this handy hiker’s guide that charts courses based on degree of difficulty.

Urban Ale Trail is shaping up to be a legendary ascent but don’t get off course: make sure you participate responsibly by taking light rail, hailing a cab, calling Uber or riding your bike.

If You Go
• What: Downtown Phoenix Urban Ale Trail

• Where: Restaurants located near Metro Light Rail, from Downtown north to Uptown