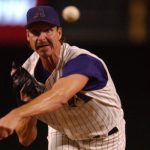 Gates will open at 2:30 p.m. and fans are encouraged to arrive early for a special ceremony

The Arizona Diamondbacks (@Dbacks) will retire Randy Johnson’s No. 51, presented by Fry’s Food Stores, this Saturday, including a special pregame ceremony honoring Randy Johnson beginning at 5:00 p.m. Fans are encouraged to be in their seats by 4:30 p.m. to enjoy the ceremony, featuring: -A special gift presentation to Randy Johnson from Kendrick and Hall

-Unveiling of the No. 51 that will permanently hang above the Legends Suites in right field

The game-worn jerseys and caps, game-used baseballs and bases will be auctioned off online at www.dbacks.com/auction. Additional game-used items, including the batting practice jerseys, will be available for purchase at D-backs Authentics at section 141 along the main concourse. Net proceeds from the sale of all game-used items will benefit the Arizona Diamondbacks Foundation.

Gates to Chase Field will open at 2:30 p.m. on Saturday and the D-backs will give away 50,000 commemorative Randy Johnson No. 51 Retirement T-shirts, courtesy of Fry’s Food Stores. Fans will also have the chance to take a photo with Randy Johnson’s National Baseball Hall of Fame plaque, the 2001 World Series trophy and Johnson’s Cy Young Awards (1999, 2002) at both Friday and Saturday’s games in the Right Field Deck.

Tickets are still available for this Saturday’s game and can be purchased at the Chase Field Box Office, by calling 602.514.8400 or online at www.dbacks.com.